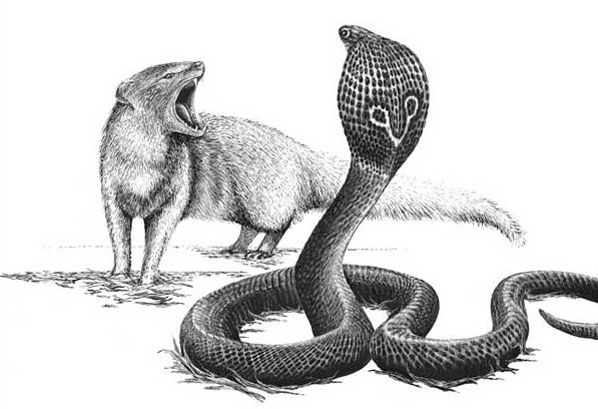 This interview is part of our Fall feature about collaborating accountably with prisoners. Mongoose Distro is a New York- and Texas-based publishing project led by Matt Brodnax. It features the art and writing of prisoners and is available inside and outside in print and online at mongoosedistro.com.

Matt Brodnax: I’m in contact with several prisoners, most of them are from Texas. A lot of them are either political prisoners or they’ve been politicized while incarcerated, and they have stuff that they want published. I’ve been the outside arm of that process. They’ll send me stuff that’s usually handwritten and then I’ll work to transcribe it and publish it online and also through print as small pamphlets.

What process do you follow for getting the zines into prisons? No staples, I guess.

Yeah. No staples! It’s pretty foolproof, because it’s just white paper with black ink. Prisons have restrictions on colour. All my publications are fairly short, so it’s safe — as far as paper limit restrictions go. My main hurdle is the content. It
is political stuff. There’s anti-prison sentiment. So I bank on the mailroom person not reading what’s coming in, or not caring. It can be hit or miss. I’ve wasted plenty of stamps.

Do you get stuff sent back to you?

Sometimes they send it back to me with or without a notice as to why they’re rejecting it. A mailperson from the Texas Department of Criminal Justice rejected some pamphlets that I sent in because they said it contains “materials solely for the purpose of achieving breakdown at prison through disruption” which is now my distro motto.
They couldn’t have written you a bet- ter mission statement than that. So, how’d you get into this work? Two or three years ago I was working at a tattoo shop — that’s what I do for a living. And I got a cold call from a prisoner in Texas who saw an article about the shop. He was calling to see if we’d send him some designs. I happened to answer the phone. I live in New York, but I’m actually from Texas, so when I realized he’s from Texas, we hit it off. I sent some tattoo designs, and we started communicating. Eventually, he starts telling me about how fucked up the conditions are. So I said, if you want, I can help you; I’ll just like, type up the stuff that you’re telling me. I did that for him for close to a year and started talking to other prisoners. After a year, I was getting all these different writings from different people that they wanted published, so I made it official, made a website.

Do you feel like there’s some spreading the good word going on there? Like it’s reaching people, politically?

I think so. People naturally realize the context of what’s going on in prison because they’re being treated like shit. I’ll sometimes send people publications, books, and zines from other people as well. They spread it
to their friends around the cells and blocks and stuff like that, and it kind of spreads like wildfire.