Creatures of the Multiverse

I watched the subdued movements of the fly with intellectual interest and emotional indifference. It wasn’t always like that. Minutes earlier I had been annoyed.

It repeatedly flew intrusively close to my face as it wove in a diversity of arcs, roller coaster ups and downs and figure-eight patterns. It came so close I kept reaching out with my hand to swat it away. I always missed, but these were no token gestures – I was playing for keeps. It was my intention to connect.

It was, after all, only a fly.

Its serial bouts of proximity disrupted my train of thought, which although not crucial to anything was at a delicate stage in its progress. I made a mental note to buy some fly spray and settle things once and for all. One drawback was my reluctance to use it, not because of the fly – after all, it was just a fly – but in concern for the collateral damage arising from my inhalation and ingestion of the toxic particles.

I was further irritated – indeed, even negatively impressed – by the fly’s inefficiency and ineffectiveness. It neither moved in a straight line towards its destination nor achieved its goal when it got there. What is it about flying insects? Especially wasps. Why can’t they leave a place through an open window? They get in easily enough, but like many nations at war, they fail to develop a timely exit strategy.

Consider what happens when a wasp gets on the bus. It creates unease. People are on edge. That wariness increases if the wasp gets behind them and can no longer be seen. Their flight paths are persistently haphazard, moving from one side of the bus to the other, randomly checking in at every window. Yet when the bus stops and the doors open, they completely fail to navigate out into the open air.

I remember one time, a few years ago, I was on the bus and there was a “twasp” incident – that is to say, two wasps. Things were really buzzing, and I’m not just talking about the aggressively striped intruders. One passenger took decisive action and made a hash of things. The first wasp, Wasp A, was struck with a rolled-up newspaper and propelled across the aisle.

Then something miraculous happened.

It bounced off my jaw and landed on my open shirt collar. I looked down at it with great difficulty, my head at a sharp angle, my neck hunched, twisted, and tense. The balance point was precarious. It lay there, stunned but recovering. Its rear end began to pulsate like an athlete limbering up. It was a watershed moment for both species. I knew if it fell inside my shirt I was in trouble, so I flicked it away with my fingernail. Unfortunately, it landed on my leg and immediately went to work, stinging repeatedly. Luckily, its target was a raised crease in my trousers. I shook it loose. It fell to the floor, where it began to right itself and started to walk tentatively. Next, its legs began to flex in preparation for lift off.

You should always give credit where it is due. The wasp was a fighter. So, in all conscience, I reached out to it – not with a hand of friendship, but with a foot encased in a sturdy shoe of animosity – and crushed it into oblivion without compunction.

Then Wasp B appeared. I don’t know if they were hive-related or just passing strangers. Either way, Wasp B entered my space with meaningful intent. Many years later I read somewhere that wasps in distress give off a pheromone that alerts other wasps to their peril. The upshot is that when the cavalry arrives, it is already primed to be short-fused. In other words, they come looking for a rumble. When you take one of them on you take all of them on. Loyalty and solidarity are wonderful things until they are used against you.

My fraught journey continued until the bus reached my destination. The doors opened. I got off. Wasp B did not follow me, being completely unable to cross the insurmountable barrier of a clear exit. As the bus pulled away, I saw it unsuccessfully engaging with various panes of glass. Perhaps it was looking for my ghost. I have no sympathy. They deserve all they get.

Now, back to my fly.

The night before there had been no fly in the room. Before going to bed, I closed the windows and door. The next morning, I entered the fly-free zone and closed the door behind me. A little later I opened a window, and soon after there was a fly in the room. It does not take Sherlock Holmes to figure out how it got there.

Ever wondered what the purpose of a fly is? My research informed me that their role is to break down organic matter into simpler constituents, thus adding to the ever-expanding pool of entropy in the universe. To put it scientifically, they eat shit.

It took effort, but I excluded the fly from my mental domain and returned to my thoughts, whose fragile threads were already withering from the previous interruptions. Shortly after, I got up to go to the kitchen and returned with a cup of tea.

Then a movement caught my attention. It came from the bottom corner of the window where there was a small, triangular cobweb in the window frame. The fly was caught in the web.

How it got trapped there I will never know. I understand that when a fly meets sticky webbing, it usually cannot free itself. I am conversant with that fact. What I am getting at is this: I measured the area of the windowpane. Then, using Flypagoras’ Theorem, I measured the area of the web and compared the two. The area of the windowpane was 15,400 square centimeters. The web was 25 square centimeters. That meant the glass pane was 616 times bigger than the web. Taking another perspective, the web was 0.162% the size of the pane, which is less than one-fifth of one percent. The open part of the window, which the fly had passed on multiple occasions, was many times bigger than the web.

I could see the structure from where I sat. Yet the fly, with its set of compound eyes adapted over eons of evolutionary time, failed to see the danger. Imagine missing the haystack and then spiking yourself on the needle.

I watched. The fly had an on-and-off button. It struggled and then was still. It may have been taking a breather between bouts of activity like people who sip filtered water from logo-bedecked plastic bottles after completing an aerobic routine at the gym. It might have been an instinctive reaction to its unwanted immobility. I didn’t know. I wondered if it knew. Flies are designed and programmed to fly. It is in their DNA. This fly could no longer fly. Consequently, it was stressed. But there was more to it than that. I mean, did the fly really know?

Did it see its situation as a temporary setback, or did it understand the reality of its position in its entire, gruesome detail? Perhaps those periods of inactivity were acts of resignation, an acceptance of its fate in the hope that a que sera sera attitude would somehow ease the horror to come. Good luck with that one, I thought.

To my mind, spiders and flies are an ecological double act, but would the fly know a spider was coming? Would it feel terror as the eight-legged, ruthless monster approached?

There were so many big questions and unresolved issues to consider. I got up to make another cuppa, which resolved one of them.

When I returned to my seat by the window, things had changed. The spider had arrived. It came from below. Not in a supernatural sense, but from below the window sill. Some of the sill’s wood had rotted away, leaving a hole under the frame. Years ago, when the rot began, I remember making a mental note to keep an eye on the situation, and now, years later, I had. Keeping promises is a good thing.

“Hole” is a descriptive and generic word. To the spider it was home, shelter, refuge, a sanctuary for arachnid contemplation. To the fly it would become a torture chamber, charnel house, and reminder to look where it is going.

Gossamer threads connected the spider’s lair to the base of the web. This way it was able to stay in touch with the world, but also remain out of sight. It could have a snooze and rely on the ongoing bounty of nature and the dumbness of flies to provide lunch.

The spider grasped its prey with its four front legs, its head pressed against the fly’s thorax. I wondered if it was injecting an enzyme that would dissolve the fly from the inside, thus making any subsequent sucking process easier. Perhaps a paralytic drug was being administered, allowing future dismemberment to be carried out with minimal resistance. Maybe the spider was feeling peckish and indulging in a quick nibble, alfresco fashion. Very cosmopolitan, I thought. I did not know how many ways a spider could kill a fly. I doubted if each way was available to every type of spider. More loose ends to deal with.

It was time to accept my own offer of another cuppa.

When I got back, the fly was further cocooned. It was a pragmatic action on the part of the spider, like packing your belongings in a trunk before going on a journey. The spider had dragged the fly a little nearer to its den, but not actually inside it.

The spider was half the size of the fly. I did not know if the fly was still alive. If so, it was probably wishing it wasn’t. Things remained like that for days with the fly powerless, isolated, and neglected, like many old people in western society. I had not previously realized there were spider politicians.

One morning I came downstairs and the fly was gone, along with my interest.

It was, after all, just a fly. 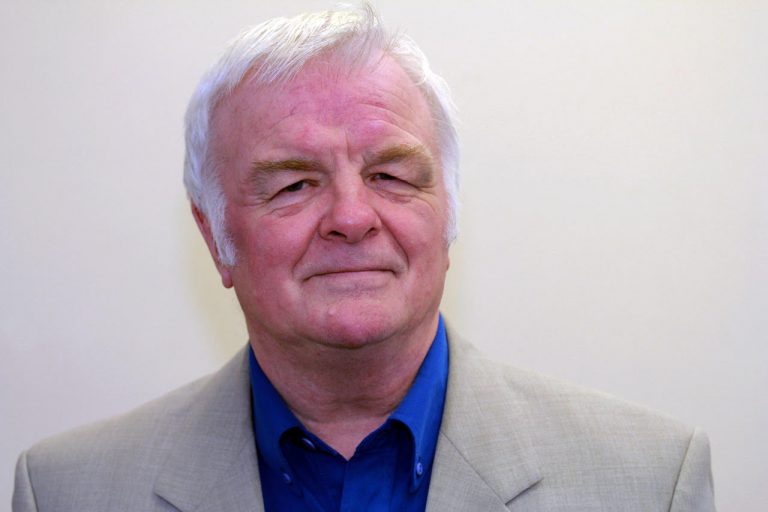 Malcolm spends some of his time playing pinball (he is a former world champion) and some contemplating the sound of one hand clapping in the dark. He squanders the rest. His fiction and poetry have been published in the UK, US, and Canada.