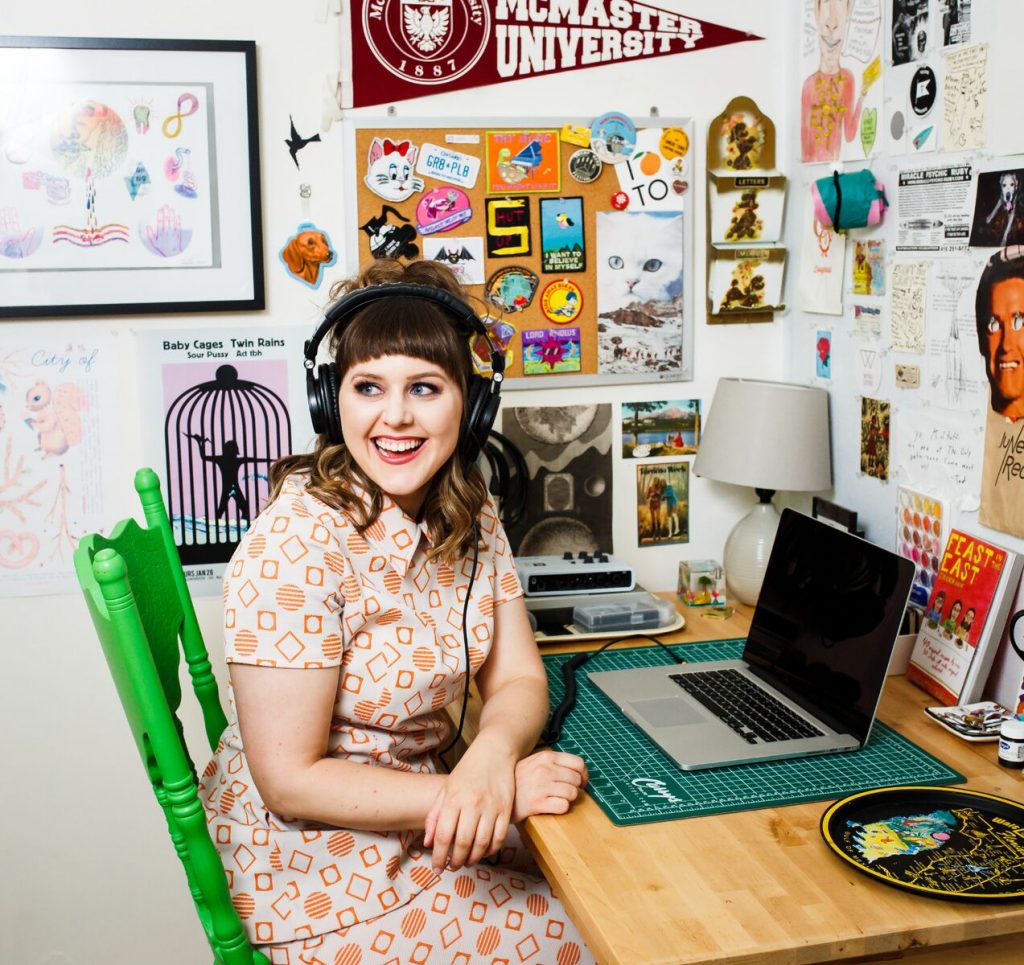 It’s April 2017. I’m at Katie Jensen’s Inclusive Podcast Workshop series where, surrounded by strangers, I’m holding back a panic attack. Yet Katie’s ultra-friendly voice and casual bless-this-mess, we’re-all-in-this-together vibe is so soothing, and her enthusiasm for the medium is so infectious, that I start to chill out and believe I can survive three hours of this, especially after a round of introductions.

The all-women class is brimming with intriguing, challenging program ideas on topics ranging from Canadian history to disability to women in music. Part of Katie’s inclusivity mandate has meant PWYC workshop participants have paid as little as $5, or received full sponsorship.We each write a script and make a demo, and when mine is played out loud the class, everyone, especially Katie, is enthusiastic and supportive. I’d arrived with the vague idea that podcasting is an important skill for a journalist, and I leave dedicated to turning my niche podcast idea into an iTunes reality. That night, I get an email from Katie that ends: “What next?! What can I do to help make this pod real?”

In the four years since Scarborough-born Katie Jensen moved from Hamilton to Toronto, her name has become associated with too many local and national cultural phenomena to name. She’s currently a journalist, podcaster, producer, musician, promoter, blogger, activist, Twitter essayist, and now instructor. She’s heavily involved with Toronto DIY music, art, and the culinary event Feast in the East, which just celebrated its sixth year. She also freelances for a series she inspired, PlusPlusPodcast, and will produce podcasts for the 2017 Polaris Music Prize. She writes and curates for the aptly named blog Weird Canada, plays in the dark-wave band Baby Cages, runs her blog Music Between Friends, and programs Indie-licious, a radio show on 93.3 CFMU at McMaster University. Yet, Katie seems at ease managing her myriad projects, tying them, and the people around her, together seamlessly with the common threads of tireless dedication and integrity.

In a city of rising rents and increasing precarity for artists, belief can be hard to come by. When Katie tells me about her own lifelong struggles with generalized anxiety and OCD (she was diagnosed at age eight), the generosity of her enthusiasm begin to make sense: this is an artist who’s mastered the tricky dichotomy of needing to ask others for help to make it on her own.

Katie and I chatted about media, DIY, music, inclusivity, mental health, and just doing the thing. Our conversation has been edited for length.

You’ve become super engaged in different Toronto communities since you moved here four years ago. How did that happen?

Pretty gradually. [At first] I had this corporate job, a place in Parkdale, and had just been dumped by this guy, who was the first person I’d met who was an artist — I was like, “Oh wait, people can make money and call themselves artists? You don’t have to be ashamed of calling yourself an artist?” I’d thought calling yourself an artist or musician had this sense of embarrassment.

Where do you think that came from?

Probably from myself. I’d made the choice to go into science and de-prioritize music. I’m the first person in my family to go to university — everyone else is a tradesperson. But everyone’s incredibly artistically gifted. No one ever said, “No, you shouldn’t be pursuing music.” It was just like, “we do these other jobs, and on the holidays we get together and play in our family band or whatever.”

So, you’re in Parkdale, and you just got dumped.

I was really sick at the time, and I was feeling pretty low. I saw a concert listing for a band called Mimico [at] Feast in the East. I’d never really been on the east end of town. So, I layered myself up and had all these Kleenexes and Halls stuffed in my pockets, and I went to Gerrard Art Space by myself, and maybe New Fries was playing — whoever was playing really took me aback. I saw Tad [Michalak] and Neil [Rankin] sitting at the door, in the little kitchen this guy was serving bowls of mushrooms, noodles, and delicious greens; women were selling glasses of wine; there was art everywhere. There was an amazing positive energy in the room.

As I left, I caught the eye of [Tad] at the door again. My friend was coming to pick me up and I remember saying to her, “I feel like I’ve gotta talk to that guy at the door,” but I didn’t. The next day I messaged him and said, “I had so much fun last night. I’d love to help,” and he said, “Okay, let’s meet for coffee.” So, we met at Ideal in Kensington and the minute he walked in the door, I just knew we would be talking for hours.

We started doing Feast in the East together — he’d already been doing it for three years at that point with Neil Rankin and Cameron Lee.

(After linking up with Feast in the East, Katie was invited to start writing for Canadian music blog Weird Canada.) What was it like to start music blogging?

I have a trademark style when I write about music. I can write about technical things, but I’d rather talk about music that evokes imagery. If there’s an electric guitar part with a lot of fuzz and distortion and penetrating sound, I’d rather talk about it sounding like a chipped tooth being dragged over metal. Something that makes you feel with how uncomfortable the words are. It makes it easier for people who don’t come from a musical background to understand what the music might sound like.You carry this accessibility over to your work in broadcasting. 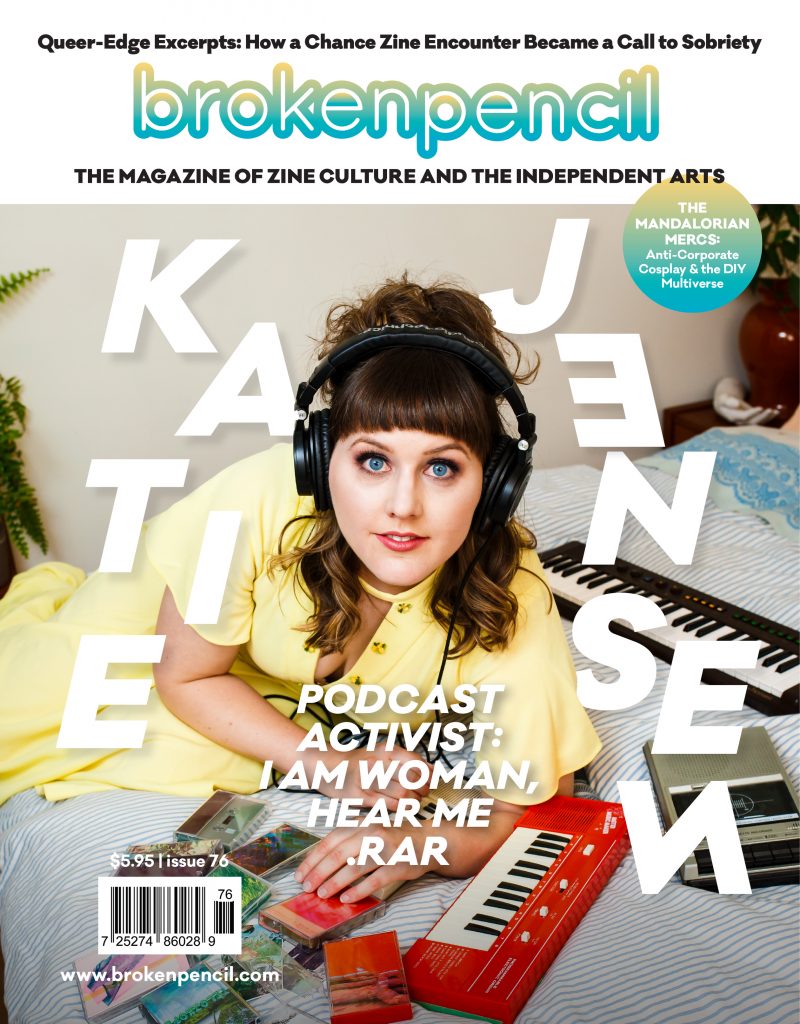 How did you get into podcasting?

When I moved to Toronto, I was still doing my radio show Indie-licious, and thought, I’m pre-recording it anyway so throwing it up on iTunes is simple. Standards were very low back then for a podcast. I was using a RockBand microphone — like RockBand the game!

How did you transition from doing your own podcasts to working on other people’s?

I was getting stagnant at the corporate job I had, and I was dating someone very creative, and I thought, if not now when? Then I went to Jesse Brown, (the host) of Canadaland, and said, “Here’s why I think you need me as an intern. These are the episodes I like; these are the episodes I didn’t like. Here’s what I think you can do to improve the quality of your sound, format, and x, y, z.” And he said, “Cool, come in for an interview in a week and bring pitches.” The next day he hired me, and I worked there for two years.

You seem to have this intense belief that you can just do things. Where do you think that comes from?

My dad! We’re basically the same person. We have similar mental health issues and he’s also super autodidactic: he’s had a million different trades, he’s a gifted artist, he can pretty much pick up any instrument and figure it out. Being the oldest, I got to do all these things with him, and just decided, “Oh, it can’t be that hard.”

How has experiencing mental health issues from such a young age informed the choices you make now?

I saw a psychologist when I was eight, but when I was 18 I started having panic attacks and obsessive thoughts. Being given such good mental health care when I was eight did two things: it made me less afraid of asking for specific help, and I knew how good treatment could be. So when I didn’t get good therapy on campus, I knew to stop and seek it elsewhere.

You’re also a very empathetic person. Where does that empathy come from?

Living in Toronto and having incredible women of colour checking me really helped me think of people who don’t look like me — people who are often neglected, unacknowledged. That became a priority for me when I saw the examples made by journalists of colour. Seeing their anger, feeling angry for them, and thinking that I have so much privilege, I should try to do everything in my power to fight for people. I became a much stronger feminist when I started listening to women of colour. 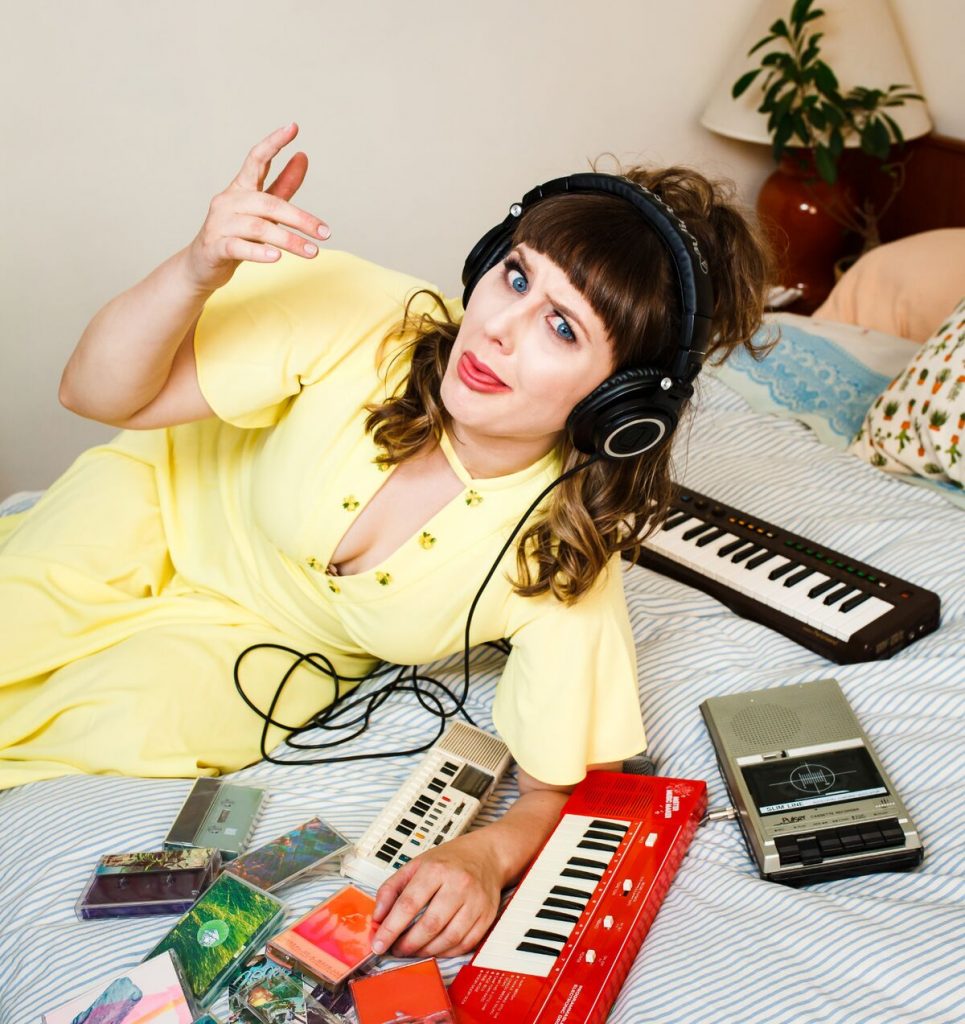 The Inclusive Podcast Workshop format seems like a natural reaction to these experiences. When did you first have the idea for the series?

I think it was late at night. I was like, “I’m just gonna put this tweet out and gauge interest.” Within a half hour it had 20 retweets or something, and all these journalists were sharing it. I’d specifically tagged people of colour because I wanted to make sure that since this workshop is targeting people of colour, artists, and low-income people, that it didn’t have that algorithmic glom-on of white people just liking it. I tried to spread it out as much as I could.

I’m at the point now where more than 130 people have signed up to be in upcoming workshops.

Why was your first priority to make the podcast workshop inclusive, and to reach out beyond your bubble?

A $20 workshop is simply not affordable for some people. I also took a lot of care to make sure all my branding went through a person of colour, I wanted to make sure someone else looked at it.

All these major podcasts are mostly hosted by people who are white, middle class, come from a journalistic background. [I hope] I can crack that open a tiny bit and say, “Hey, it’s easy, and you’re just as important and deserve to be heard.” I try to convey that in my workshop. White men have been told they belong places and they deserve things, we have to tell [other] people that they belong and they deserve things.

Speaking of outsider and often marginalized backgrounds, why is a DIY approach important to you?

DIY scenes give you a place to fail without huge pressure, because when there’s a formalized institution scrutinizing you — or high-stakes where you’re investing a lot of money — you get fewer chances. With DIY, you can play your first show in a small setting with relatively low costs to the people running the space, and relatively low-cost to the audience.

DIY spaces are a fertile ground in which to develop as an artist, make connections with other emerging artists, and build a more inclusive and supportive community. When you go to a DIY space, you might stand next to someone who’s a visual artist or a performance artist and not a musician, you can get to talking, and maybe you do a project together down the line. It’s a forgiving and encouraging space, everyone’s doing a lot with very little, and you can get very creative with the restrictions placed on you when you have no money.