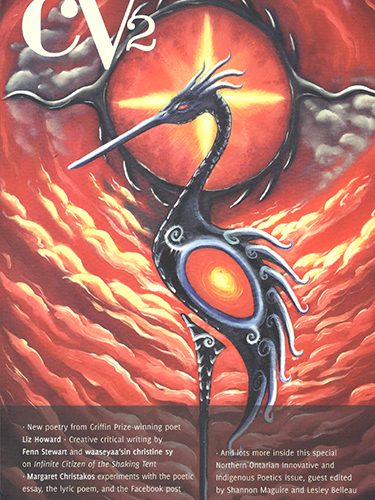 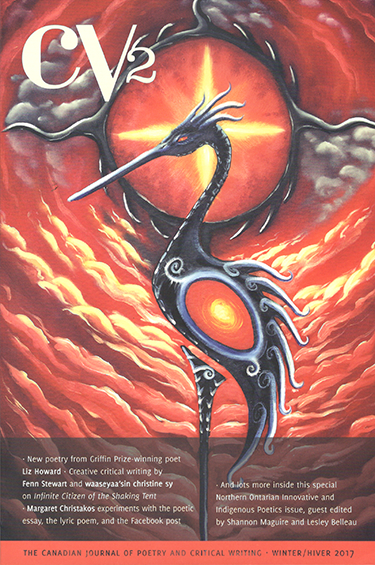 The focus of the winter 2017 issue of CV2 is on Northern Ontario Indigenous writers and writing, and the aim of the poems within it is to tell stories.
Some of the stories are traditional, like James Treat’s narrative on wolves: “fathers and mothers gave warning / to their little children not to / speak bad or unkindly of the / wolf.” Others are personal recollections of life as an Indigenous person, like this from Keri Cheechoo, later echoed by other contributors: “Female and Indigenous / I swam beneath the surface / Of society / I spoke and my words / Evaporated.” “Don’t tell us a story,” says waaseyaa’sin christine sy in another poem, “tell us your story.”
History, identity and agency all receive in-depth exploration here. There’s plenty of the navigation of everyday life in 2017, as well. An essay on, and also a review of, Liz Howard’s Griffin Poetry Prize-winning Infinite Citizen of the Shaking Tent hold prominent position. The issue’s most intriguing entry is a collaboration between co-editor Shannon Maguire and Finnish writer Vappu Kannas (Maguire points out that there are numerous Finnish people living in Northern Ontario). It’s a part Finnish, part English long poem that deals in experimental (that is, not always literal) translation.
For a collection with such a specific emphasis, this issue of CV2 manages a commendable breadth of style and variety in both subject matter and perspective. (Scott Bryson)