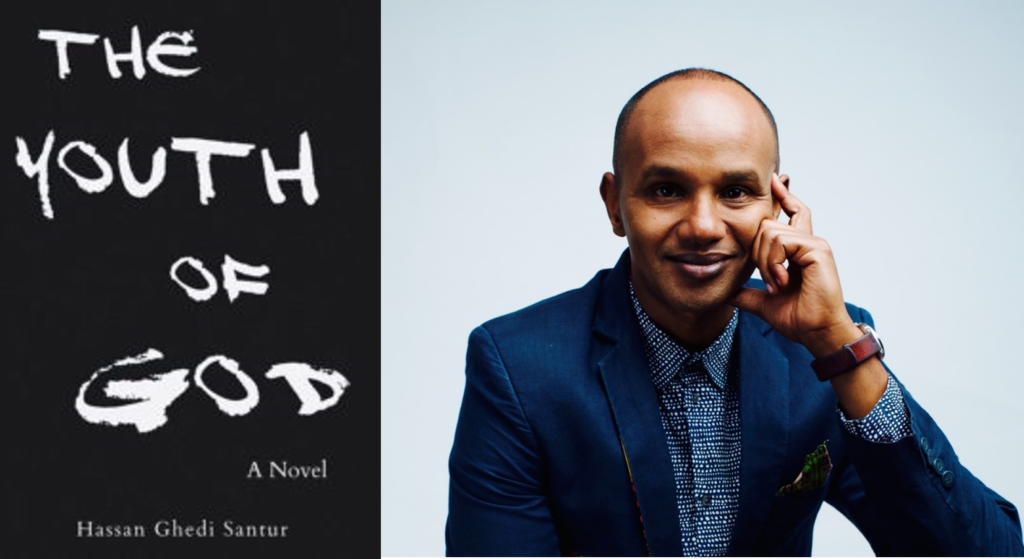 The Youth of God.

In stark prose, Toronto-based writer Hassan Santur explores the Somali-Canadian experience through the eyes of two characters: First, there’s Mr. Ilmi, a passionate Mogadishu-born high school teacher trapped in an uncertain marriage, the result of an arranged union. Then there’s his student Nuur, who knows only the grey suburban towers where he and much of his community lives. Nuur is a devoted Muslim, bullied by his peers (and his itinerant father) for his beard and traditional dress. Mr. Ilmi sees potential in the young man, but so does the radical Imam Yusuf of Nuur’s mosque. The Youth of God is a brave novel that lays bare the complexity and pull of extremism.

The Youth of God is part of our Summer 2019 Indie Book Picks.

What inspired you to write a story about a young Somali boy caught between his faith and his budding academic interests?

Sometime around 2012/13, I was working on a different novel but I kept reading newspaper articles about several young men who were radicalized in Canada and left for Somalia to join Al-Shabab. I was plagued by an inability to comprehend what would make a young Canadian man who has never even been to Somalia leave his life here to join a terrorist group. I dropped the other novel I was working on and started exploring that question. So in a sense, The Youth of God is my attempt to find an answer. Also, in 2014, we started seeing more news stories of young Muslim men (and some young women) who were leaving their homes and families in cities such as London, Paris, and Stockholm to join ISIS. So the whole time I was writing the first draft of the novel, these real life stories were weighing on me as I tried to figure out the story of Nuur.

Did you draw on your own experience as someone who immigrated to Toronto from Somalia when crafting elements of your characters?

Absolutely. There is a bit of me in both Mr. Ilmi and Nuur. Mr. Ilmi came to Canada at around the same age as I did, in his early teens. He has vivid memories of his early life in Somalia—even his trip back to Mogadishu and his attempts to find his childhood home, which was completely destroyed by the war, mirrors my first trip back to Mogadishu in summer of 2012 when I went there to make a two-part radio documentary called “Things We Lost In the War.” There are also bits of me in Nuur. When I was a teenager and new to Toronto, the sense of alienation and differentness I felt is quite similar to what Nuur feels. And, like Nuur, books became a refuge and a way to make sense of the new world around me.

There are several similarities between the roles of the imam and the teacher, and Imam Yusuf and Mr. Ilmi become almost parallel role models in Nuur’s life. What draws these two figures to Nuur, and what does Nuur seek from them?

I think both Mr. Ilmi and Imam Yusuf see something in Nuur, a quality they possessed when they were his age and which they are trying to foster or exploit for their own purposes. For Mr. Ilmi, Nuur reminds him of his curiosity, his bookishness, his love of school and especially his interest in going to medical school and becoming a doctor. In some ways, Mr. Ilmi is trying to fulfill, through Nuur, his own unrealized dreams of becoming a doctor. Imam Yusuf is drawn to Nuur for qualities that he can exploit, namely, his piety, his devotion to Islam, a tilt toward dogma, and an unspoken yearning for a father figure that he senses in the young man. So in a sense, Nuur becomes a contest of sorts between these two powerful figures.

The novel highlights a divide between Nuur, a second-generation Somali immigrant, and his parents and teacher (first-generation immigrants); they find his religious devoutness baffling. Do you see this intergenerational dynamic reflected in reality?

This intergenerational conflict between first-generation immigrant parents who are relatively progressive Muslims and their children who gradually become quite religious, much to the bafflement of their parents, is a well-documented phenomenon in the west. Many of these parents grew up in Muslim countries and cultures in the 1970s and 80s before the arrival of strict Islam, the type propagated by Saudi Arabia in much of the Muslim world. This intergenerational dynamic is something I have also observed in the Somali community of Canada. Second generation immigrant children who often feel alienated in their own countries, be it Holland, France, United States, or Canada, turn to Islam (and often a strict form of Islam) to find a sense of belonging and acceptance—and I think Nuur is one of those young men.

Themes of home and belonging recur throughout the novel, as many of the characters feel alienated from Toronto and wish to return to Somalia one day. Can you expand a bit on these tensions, and how they reflect on the lived experience of several Torontonian Somalis in the city today?

For many Somalis who fled the war and settled in different parts of the world such as Canada, migrating and being a refugee was never a part of the plan. It was a necessity. Many older Somalis felt they would go back home as soon as the civil war ended. They never imagined the conflict and its consequences would last for three decades. So for those Somalis, memories of home and the lives they left behind have a strong emotional pull, one that sometimes gets in the way of their ability to fully inhabit their new homes and lives. It’s a painful existence of alienation because it forces people to lead “suspended” lives that are neither here nor there. I think Nuur’s parents who were forced into exile by circumstances beyond their control suffer from this condition of living in the past and in perpetual longing for a home that no longer exists.

You are currently working on a new book called Other Worlds, Other Lives. Can you tell us anything about it? What can we expect from your third novel?

My third novel also explores the lives of migrants and refugees but this time in a completely different context. The novel is set predominately in Rome where I spent some time in 2015 reporting for what later became my non-fiction book, Maps of Exile. In recent years, Italy and specifically Rome has become the epicenter of Europe’s refugee crisis. It’s a place where people from different countries and cultures collide, sometimes in a form of conflict, but also where deep human connections are made. The novel explores the lives of three women who become deeply connected through a tragic event.

Get your copy of The Youth of God today!