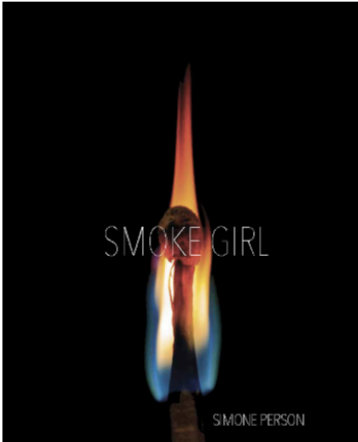 There is an internal conversation that is thrust upon a victim of rape. Simone Person’s Smoke Girl, dives into that inevitable personal monologue and the crucial stages of grief it entails. Utilizing many forms, such as erasure, prose poetry, free verse, and even an altered version of Allen Ginsberg’s methods, there is no hesitation in Person’s words for they are razor sharp in their assessments, “Didn’t you notice he was a dog? Look back. Find his feet curved to claws. The bark in his throat.”

Person’s elucidates unrelenting trains of thought that go from immediate anger in her intro poem, “On Learning You Love a Dude Who Ain’t Shit,” to crawling out of predatory gaslighting, “I’m fine with singed hair and smoke that follows me if I’m the one you burn.”

For the reader, the pain in the aftermath of rape is palpable and Person’s lyrics are incredibly visceral in struggling with a loss of a sense of self and place in the world.

What grabbed me most about this chapbook is that Person is fully within the body and outside of it, dealing, deciphering, and appreciating it in its Blackness versus the possible and actual cruelty in its violation.

The perpetrator here is a white male, and thus adds an extra layer to the internal exchange explored here. This work, a woman set on fire to the point of wanting to destroy herself, is not just about rape, but how white supremacy itself has violated a space it knows very little about, for whiteness assumes, “White people are always asking me questions we both know the answers to,” and is complicit in the harm that comes from it.

This collection is emboldened by the stark jacket design, a matchstick glowing in a rainbow of fire against a dark black background. It calls out, much like Person’s work inside of it, to listen to what has been done, because there is an intensity within that should not be ghosted.