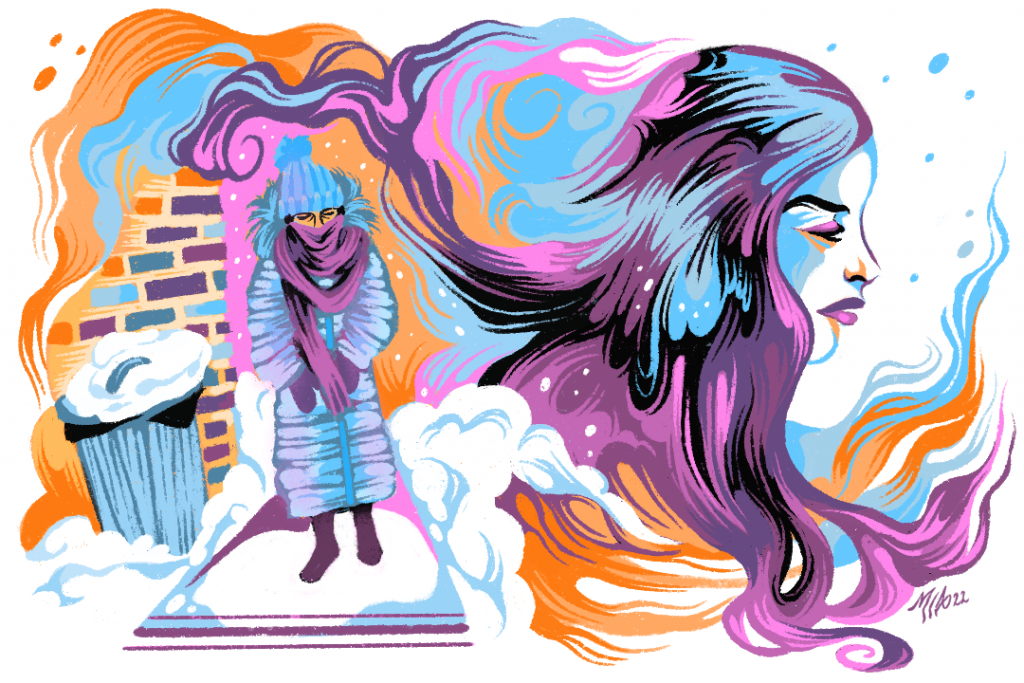 Things to Remember Next Winter

Kay doesn’t leave their city cave on top of the feeding hole until after dark and the street smells like rotten melting snow. A lot of people with cardboard signs and many backpacks ask Kay for change and cigarettes. They feel guilty and uncomfortable.

When they get to the drinking can store they wish the big-smile lady who remembered their birthday last time will be there, but she isn’t. Instead it’s the can-stocking man who opens and closes his fist a lot, and he’s blocking the cans.

“Can I help you with anything?” asks the Can Man.

The Can Man is opening and closing his fist at Kay.

Kay hasn’t had any cans that day yet and Can Man’s breath smells like mean eggs. They go to a different store with a nicer Can Man who doesn’t ask for the card because he remembers them.

When Kay gets back they write in their journal:

Friday, past midnight, on the corner—grown up children took turns punching each other and smiled just how your person smiles when she holds your head at night.

The last time you visited your adults they had massive gramophones for heads. The records don’t complement each other and when you press pause, they get louder. Don’t forget.

Don’t swim in the sauce for too long.

Your phone screen is a cage full of wonderful humans you can’t talk to and terrible monsters that won’t hurt you.

Months later Kay and their person are going to their cave. The long tube car crashes along the track and swells inside with jazzy shapes hooting their mouths like fast horns. Everyone swelters in the summer heat.

Kay’s person is tall and sharp and angry, but also small and soft and happy. She dyes her hair black, thinks in images, mostly purple colours, and tries not to smile at strangers—she likes to think of herself as a ghost when floating through crowds. Ghost wants to start a forest commune far away from screens and live to be one hundred and never marry and never have children.

“I want my body to be eaten by a pack of wolves after I die,” she says. Kay feels that the image of a pack of wolves eating a hundred-year-old woman in a forest is either beautiful or unwieldy.

An older man compressed neatly into a grey suit talks to them about how and when the music show is happening. Ghost listens and enjoys his company despite wanting to laugh at his use of the word “hooligans” and his saxophone tie. Kay smiles at her.

As they all get closer to Kay’s home, long oblong-shaped boys near the back of the bus, six of them, get louder, trilling at each other and everyone else in the car. They drop burger boxes and drinking cans out the windows onto the city’s gray spine.

Ghost does nothing but sit silent and haunt the tube car window with thoughts of injustice, and so the compressed older man stops talking.

The music show that’s happening blocks their way home and everyone has to get off the tube car early. Choppy jazz wilts from blocks away while the Oblong Boys unhinge and run ahead of the tube car crowd. Ghost glides softly behind and watches them make unrest—surrounding women and shouting at them, swatting their hats off, throwing bits of chicken as they run away scared.

“That’s the third one,” Ghost tells the air in front of her.

The Oblong Boys cross the street yelling to some teenage girls about their dicks and don’t look back at the food or the frightened women or the empty cans.

When you hear “Bloor-Yonge Station—change here for line 2—doors will open on the right…please stand clear of the doors,” then you’ve missed your stop.

You have to think that you’re the most human mutant or else you’ll mutate more.

You have eight eyes. Figure out which two see things best and stick with them.

If you leave her, tell her why. You have to work it out with her or else it’ll be like it never happened and you’ll forget again. Don’t forget!

Kay brings six cans in their backpack in case they leave her that night, and they end up leaving her that night. Later, instead of doing other things, Kay drinks the cans and watches screens.

On the screen someone tells Kay that future people’s screens will just show other people watching screens.

They watch their pasty yellow wall vibrate for a minute, then flee outside to smoke. It’s puddly and they have to wipe wet off the smoking chair but the dirty blue air tastes electric and the night noises and star shimmers make them feel free and alive. They try to remember Ghost’s face before the door shut but can only recall it in flickering freeze frames. They realize they’ve never seen her cry before. That’s probably Kay’s fault, but they don’t have room for that thought so they flee inside.

Kay watches famous people pretend to sing songs at each other and then watches them read mean things people said about them from their screens and then watches them actually sing songs with each other in cars. Then they watch 23 simple hacks to make their life better and also watch a parody of it in which a man puts a shotgun in his mouth while the narrator tells Kay to just do it already. They remember showing Ghost that once and how she hated it, and then the freeze frames of Ghost at the door, and then they flee outside to smoke and the night noises and the star shimmers get duller with each can.

“To give herself a little treat,” says the narrator.

Soon Sam begins seeing things that aren’t there, or at least starts seeing things unlike they actually are. Sam and her ex-boyfriend get that coffee and he wears the blue sweater she likes and things seem manageable for her, but on her way home people start to distend, or to vanish mid-motion, or to otherwise lose logic. Their conversations shatter and shimmy about, towing Sam’s attention in opposite directions. She can’t tell where her seeing of it all begins and where it all ends.

Sam is in a blanket under a coffee table in her mom’s living room when her mom finds her. The next day the doctor tells them both that Sam is dying. Early-onset-something-or-other. Same thing Sam’s father had.

“DNA…memory…parents…yeesh!” says the doctor looking at Sam’s chart. “Make sure she watches a lot of sitcoms.” He taps the chart against his temple.  “Sitcoms will help her hold things together up there.”

The rest of it is just bits and pieces of Sam’s final days: choosing between fish or chicken for dinner and why, her mom opening her hospital room door harder than  necessary, trying to remember why awkward moments with the blue sweater man are important, but mostly watching six white friends dance in a fountain over and over and over again.

Sam thinks she knows some of the people around her bed but most of them are from screens and none of them stay the same for long. She thinks this whole process is annoying and after imagining a few things tells everyone not to bother sticking around.

“You’ve got better things to do,” she says, regretting it immediately.

She dies and that’s it and Kay cries a little. Everything’s foggy with the cans and they smoke. Back inside they don’t expect to remember their dreams and don’t brush their teeth and the night stops.

Any face on the street could be one you’ve forgotten.

Remember how she told you that you made her insides black and that that’s true.

Sam’s mom probably knew what to do when she found her.

Have someone take a picture of your poker face, look at it, and go on living your life.

Self-awareness isn’t as important as you once thought. Try not to think about it too much.

Kay continues. Gray blobs pass every day in the tube car windows and the choppy summer jazz turns to hard winter silence. The screen faces change too, and Kay tries hard not to mutate with them. Ghost has decided it’s best they don’t talk, and Kay tries to feel like that’s alright.

Kay manages to get out with new people sometimes. The new people all drink cans in glasses at bars and shout when they want to and Kay likes that.

The morning after a loud night Kay’s bed feels like a cage and they’re afraid of outside. They look up at their pasty yellow wallpaper, lose ten minutes, look down, lose fifteen, and then lose another ten on the wallpaper.

They make coffee and get afraid of it burning their hand, but it doesn’t. They can’t remember what they want to do and lose another fifteen on the wallpaper and drink the coffee.

They try to look at a screen but can’t understand the famous-people-games and can’t imagine the life-fixes being helpful and don’t want to risk thinking about the left-right-black-white-boy-girl thing or the shotgun thing and shut the screen.

They get an apple and take a bite and lose a minute looking at the empty chunk. On the chunk, they think about how when they were ten their older brother had problems that created problems and how their older sister had problems that created problems, and does that mean that every problem creates problems and are they supposed to just live through the problems even if they don’t want to and think how they’re still living through them even though they don’t want to.

The chunk gets brown. They don’t want the apple anymore and think of something awful.

Kay calls their sister and she says it’s lucky they caught her on lunch break. Kay bites around the brown bits and apologizes for eating on the phone. When they hang up Kay makes a list of names and dates for conversations they need to have and stops losing time on the wall.

When they start losing time again they panic and instead watch five hours of six white friends dancing in a fountain.

A year later Kay’s riding the tube car upstream to meet their mother. They’re wearing a tank top Kari from group made them that says “Very Mentally Ill” because Kari knew they would think it was funny and they do.

An old pickled man boards. His jacket’s too light for this winter and he smiles at Kay maybe too much. When he gets up to leave he looks like he’s going to say something but the opening doors blow his hat away like something from a screen.

Kay’s mom meets them upstream and talks like she’s power walking. She doesn’t like Kay’s eyes and doesn’t mention their shirt. The two of them get lunch together and Kay’s mom talks about how complicated screen cages are nowadays and about how famous screen-humans are actually terrifying monsters and about how her dead relatives’ kids look like ghost clones of her dead relatives. She shows Kay comparisons on her screen.

“It’s like he soul-sucked Jimmy’s eyeballs,” she says and keeps screen-scrolling. Kay keeps not saying things and keeps breathing and keeps listening.

She drops Kay back at the tube cars with a new screen cage. Kay plays with it downstream for a couple stops before Ghost boards. She doesn’t seem to notice Kay or their shirt but looks long and sharp and alive in her big black stomping boots. She looks like someone who’s going to live to be a hundred.

Ghost gets off two stops downstream and Kay watches the other humans ride. 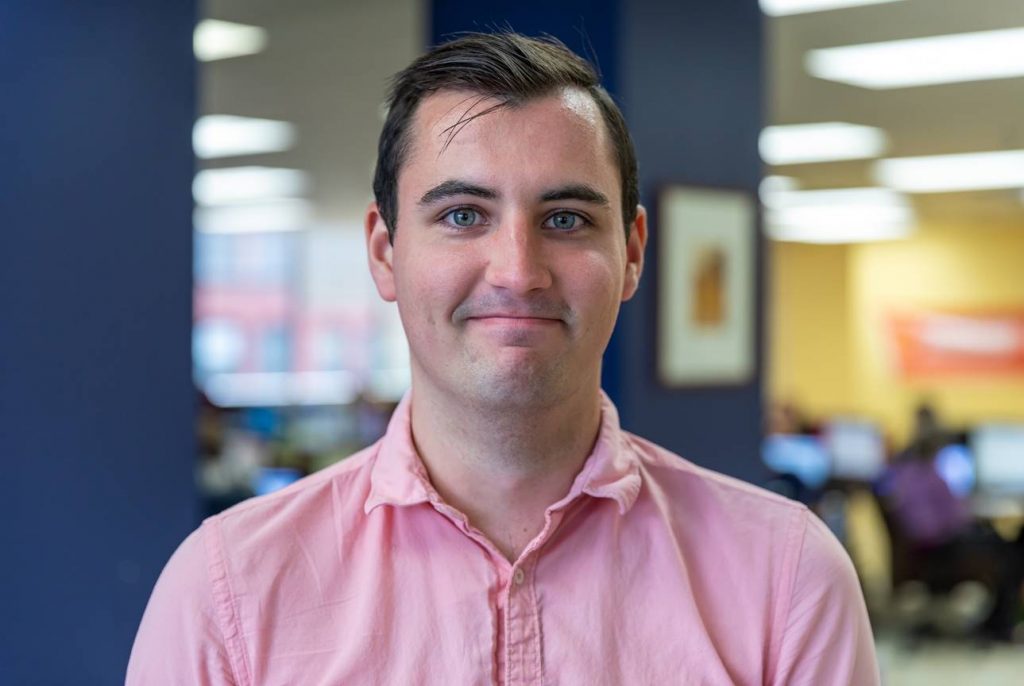 Nick Flynn is a writer and political working stiff living in Ottawa. Overeducated in literature and communications, he writes creatively blunt fiction and political commentary.