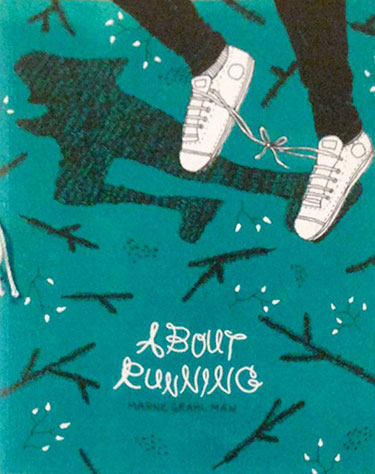 Marne Grahlman’s illustrative style is as marvellous as it is understated, but it is really something else entirely to see her work here in print. About Running is a quirky little commentary on why people, animals, monsters, or things run, or choose not to run at all. Its simple narration takes the form of titles for each two-page spread, and rarely gets beyond the simple “Some people run because they feel stuck”, or “some people run for exercise”. Each title depicts a little scene, though, unrelated to the rest of the comic, complete with characters and a little narrative that demonstrates the particular kind of running currently under inspection. This is where Grahlman’s work flourishes. She sketches cats, Godzilla, squirrels, dysfunctional couples, and running shoes, all in a gorgeous combination of black, off-white, and moss-green. The fact that the zine is hand-stitched is only icing on the cake. Readers won’t pick up this zine for any kind of legitimate commentary on running or runners, but of course that was never Grahlman’s intention. About Running is a gorgeous little piece of work, and Grahlman is a zinester to watch out for. (Joel W. Vaughan)