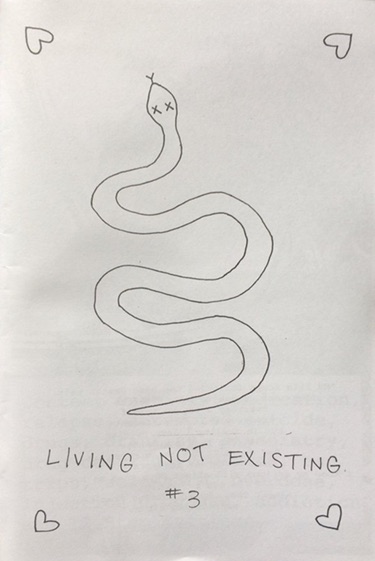 I’ve always been drawn to the zinemaker’s ability to cover subjects often seen as too controversial by mainstream media. In issue 3 of Living Not Existing, Toronto Queer Zine Fair co-founder and zinester geoff speaks about their experiences dealing with addiction and mental health.

In a series of short and eloquent pieces, geoff describes their road to sobriety, as well as their experiences as a mixed race genderqueer of filipinx descent. A lot of their stories touch on self-discovery and their process of finding their place in the world. Although Living Not Existing definitely has some heavy content, I found it to be both a positive and inspiring zine, as exemplified in a piece titled Dear Former geoff:

Regardless of your background and experiences with addiction and mental health, I am sure you’ll find some strength in geoff ’s writing. Recommended. (Maxime Brunet)