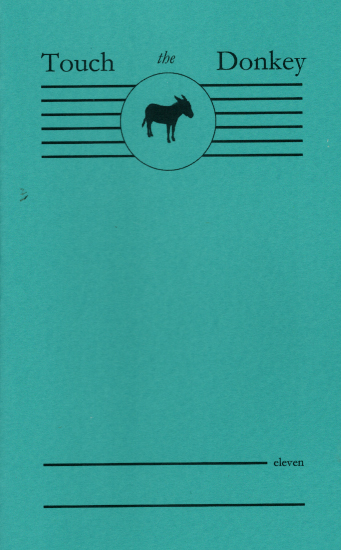 The eleventh incarnation of rob mclennan’s poetry journal presents a few writers familiar to those well-acquainted with above/ground press’s prolific output (including Buck Downes, lary timewell, and Kemeny Babineau). However—in addition, the little journal features double the number of fresh faces as well, balancing stylistic expectations with a little new blood. In all, there is nothing here which significantly differs from mclennan’s editorial approach in previous issues, but this is by no means to say that the poetry contained herein is not worth investigation.

A kind of ‘scratching out’ of form makes itself felt in a number of these poems, and one wonders whether mclennan’s grouping of them together was thematically intentioned. Buck Downs’s “full speed in partial paradise,” reading: “beaten gold | in hammered sheets | golden chain | I doubt I see” was composed using personal notes that were transcribed, cut out, and re-arranged, then pasted into little disordered monologues. Kemeny Babineau’s “The Log of Wonorata,” similarly, began as an erasure poem, and figures semi-significant couplets (ie. “V: Red Wolves of Poverty | Petroleum Mecca teat”), though it does not present itself as such when printed in short-line towers, just as Downs’s work cannot be made out as word-collage. An excerpt from The Pain Itself, by kevin martins mcpherson eckhoff brings this scratching out of form to new heights, figuring an entire page in prose, with text replaced by “Lorem ipsum…” garbled Latin.

above/ground’s “Touch the Donkey #11,” then, seems concerned with representing and mis-representing the form in which poetry is written, originates, or operates, and often to interesting effect. It is worth a look. (Joel W. Vaughan)