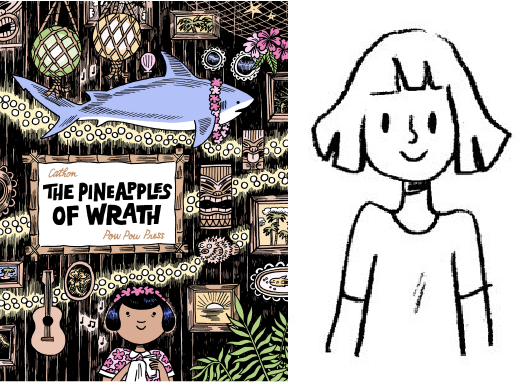 The Pineapples of Wrath

The Pineapples of Wrath is part of our Summer 2019 Indie Book Picks.

After self-publishing some critically acclaimed zines, Pineapples of Wrath is your eighth professional book! Congrats! Can you tell us a bit about your journey?

I moved from Québec City to Montréal in 2010, in order to do a bachelor’s degree in visual arts at UQAM. Around the same time, I enrolled in a comics workshop which was being given at the Cégep du Vieux-Montréal by Jimmy Beaulieu – which, at the time, I only knew from his work. I met a lot of people from the Montréal comics scene there, and I just fell in love with that scene. They were all very warm and welcoming and I immediately felt at home there. It’s just a very tightly-knit group of people, and everyone helps everyone. It isn’t fueled by competition or anything. People around me were telling me to take it more seriously, to invest more time into my blog and making zines. So I just followed their advice. The first professional book I did was La liste des choses qui existent, a collaboration with my friend Iris which was published by La Pastèque in 2013 while I was finishing my arts degree. I then worked at a bookstore for about a year and a half and actually left that job in order to finish Vampire Cousins on time and I ended up never having to find another job after that! I was very lucky, because it all worked out very naturally. Since 2014, I’ve been able to live off illustration contracts, comics and children’s books. It’s not always easy, but I love it! The Pineapples of Wrath is my 8th book, but it’s the first professional comic targeted towards adults which I’ve done all by myself. So I’m very proud of it and I just had a lot of fun doing it.

What drew you into the zine scene? How have things changed since then?

I did my first zine Trois secondes plus vite back in 2011. Basically, I made it because I wanted an excuse to be at Expozine, which is this huge zine fair here in Montréal. I actually enjoyed having a precise goal and a deadline, instead of simply drawing stuff here and there. It was also the first time my work was really available, and I learned a lot from the work of other artists in the zine community. Making zines is how I learned to do stuff like scanning, editing and printing – all of which is still very useful to me now. And the freedom you have when doing zines is amazing! I still like to do zine every now and then, even though most of my energy is now channeled towards making books. And even to this day, I use Expozine as a deadline to finish zine projects.

From the fast-paced detective story, expertly-crafted trading cards (and art in general! I mean, wow!) and humour littered throughout — there’s a lot going on at once! What is your writing/drawing process like?

All in all, Pineapples took about nine months to make. It was especially challenging for me to write a detective story, because of the organisation and foresight that is required in order to make something which holds up. I first wrote the story on post-its, making notes as to what individual characters were doing at any given time during the story. But even before that, I had started writing scattered notes about places, objects, characters and situations – most of which having to do with tiki culture and kitsch. These were all puzzle pieces, bits and pieces which had to fit in the overall narrative. Once my story felt strong enough, I started working on a storyboard, which is also when I started writing the dialogue itself. Storyboarding is where most of the decision making actually takes place. I do a lot of fine tuning on rhythm, for example. Then, once I’m satisfied, it’s time to do the final drawing
and then the inking itself. I went real old school on Pineapples of Wrath… pencils, and then pen and ink.

Do you read mystery novels yourself? Do you have a favourite?

Yes! I was mostly inspired by the old Agatha Christie novels I read back when I was a teenager. I love Death on the Nile, because of the theme. The setup as well as the basic structure, in The Pineapples of Wrath, are classic Agatha Christie : a lonesome detective, which has to investigate because the police isn’t available. Except, in my book, the police is busy with its annual corn roast. These books are filled with clichés and tropes which everyone knows, and I just love to subvert these in order to make something new and funny.

I’m currently working on the third volume of a series called Poppy and Sam, which is published in English by Owlkids. They’re these tiny little characters which live in a garden, and the first two books were basically detective stories. But I wanted to try something different for this one, so it’s basically about hibernation and insomnia. I’ve also started collecting notes for my next graphic novel, and I’m still listening to Hawaiian music all the time.

What are you waiting for? Order your copy today!