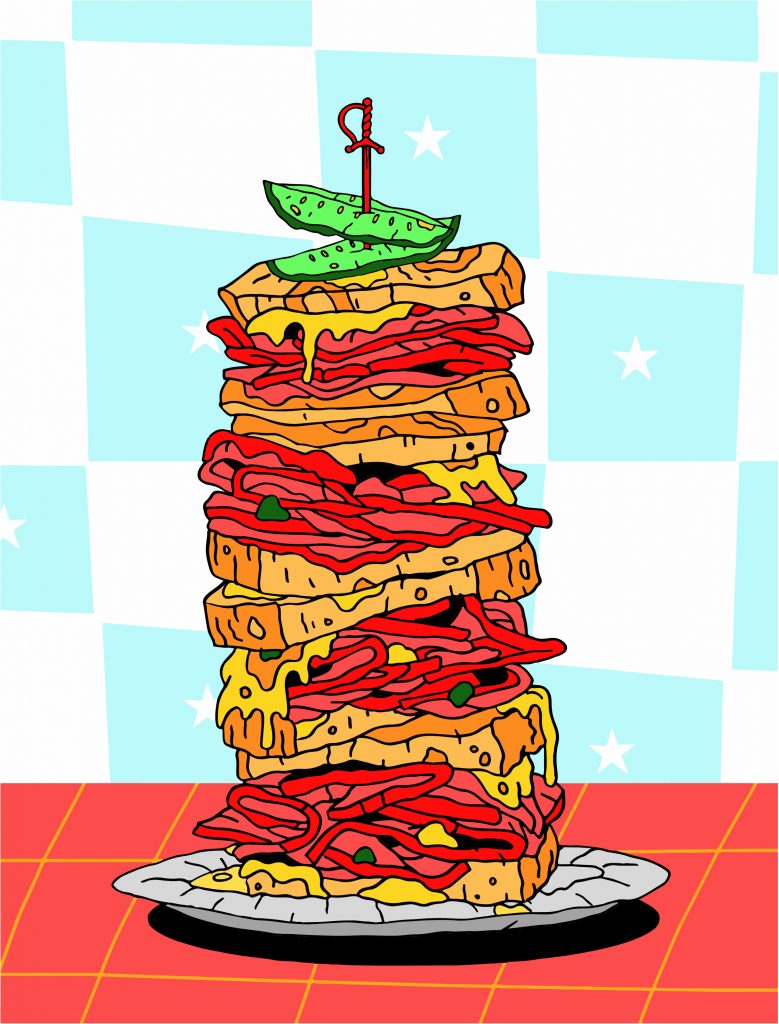 Jim Doering gives us a revolt against deli prices in this months online exclusive. In January, our online fiction will be replaced by Broken Pencil’s online short story tournament: The Indie Writers Deathmatch. Click here to submit and here for more information.

“Plastic-covered paperclips will be the first to go when the peasants revolt. Mark my words.”

The two men sat around a small, metal table at an outdoor café on the Upper East Side of Manhattan. Vanya, short and paunchy, wore a black fedora and an old green army-surplus jacket. He nursed an espresso. Smoke curled from a cigar in his tobacco-stained fingers. Shimmel, tall and thin, his long salt-and-pepper hair untamed, was garbed in a faded-denim shirt and jeans. He was sipping on his second cup of steaming black coffee.

“Vanya, please explain about the paperclips.”

“I’m shocked at your naiveté, Shimmel,” he said as he exhaled a puff of thick, acrid smoke. “Is that ashy gray in your beard all that remains of your fire and fervor? The paperclips are but a metaphor. This bourgeois society heaps upon us such gravity of useless things so as to convince us that we are joyous with choice, when in fact we bear the heavy burden of abject slavery. Coating a paperclip does not improve its use, it only increases the cost.”

“Perhaps the colors are pleasing to some.”

“I once thought you a man of better intellect, Shimmel. Colors are of no consequence. It is but one more opiate to deceive the oblivious masses.”

“How does this relate to Pinsky? I was confused by your voicemail message.”

“Yet you called me this morning about him. Pinsky has long been a fervent supporter of the cause and a comrade to us both.”

“A comrade to you, perhaps. No longer to me.”

“How did you two fall out?”

“You offend me, sir. I played no part in it. It was his decision, his betrayal. One that demanded a response with consequences. He argued that our differences were minor. He has clearly been seduced by that vacuous new wench of his. Convince me that you have not been deceived as well, Shimmel. I fear for you.”

“Me? Have I not worked tirelessly? Have I not organized, spoken, encouraged, forged alliances, even humbled myself by begging my elderly parents for significant resources when we were threatened with eviction from our headquarters in the Bowery? Do these things count for nothing?”

“It is not your past actions but your current maladaptive thinking that is at issue here. You must be stronger than Pinsky.”

“What were his crimes?”

“He invited me to lunch at Katz Deli.”

“Their meats are delightful.”

“I fear that you are proving me correct yet again in my earlier assessment. That Pinsky would eat at that cursed establishment, knowing that the place had become a force of evil was simply beyond my tolerance.” He looked down, noting Shimmel’s new orthopedic walking shoes and leaned forward, his eyes narrowing. “Can you imagine? Twenty dollars for pastrami on rye? Reprehensible. No common man should be forced to surrender so much of his already-meager slave-wages for the simple sustenance of a few bits of sliced, fatty meat and factory bread. We argued. I told him I refused to patronize the place anymore.”

“Perhaps he perceived Katz as a means to end. Fill a man’s belly and then retrain his thoughts.”

“Some indignities are simply too great to bear. That Pinsky, who once led us, would be so easily duped by crass commercialism is frankly disgusting. He actually had the audacity to laugh before hanging up on me when I pointed out his treacherous betrayal.” Vanya pounded the metal table with his fist. Patrons turned, but he paid no attention. “I will suffer his impudence no more.”

“Do you mean to have him killed?” Shimmel asked. Vanya turned away, a wistful look in his eye, but quickly spun back to face his friend.

“His destiny is in fate’s hand,” he said, punching out his stogie in the empty espresso cup. “I am simply a soldier of the revolution. But let me ask you this, Shimmel.” He pointed a finger. “What do we do when a hammer or saw breaks?”

“I grasp your point, but lament for our former associate.” He sighed. “I surmise you have a plan.”

“You know me well, old friend. The boycott and picketing of Katz commences next week.” He raised his arm and voice. “We shall decry their villainous turpitude.”

“Allow me to play a small part. I can have the usual signs made.” He paused. “With your permission, of course.” Vanya sat back, his arms crossed.

“This is acceptable. You demonstrate a favorable attitude. Which shop will you use?”

“No. Use Metro on 36th. They’ll give us a better discount. Tell them Harold sent you.” The two rose and left the café, ambling side-by-side down the cracked sidewalk.

“Are you in need of nourishment?” Shimmel asked. Vanya shrugged. 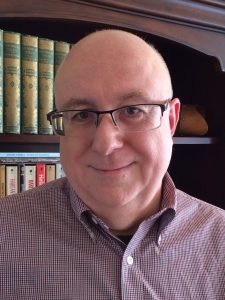 Widely published and award-winning author Jim Doering has been the recipient of three Pushcart Prize nominations. He is the author of Sacred and Profane, and Other Stories.