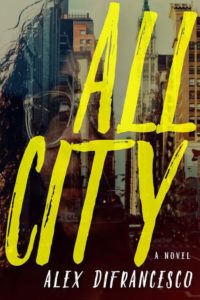 All City
Alex DiFrancesco, 276 pgs,
Seven Stories Press, sevenstories.com, $23.95
In a socially stratified near-future New York City, a carbon-caused superstorm requires mass evacuation and brings the city to its knees. Those with nowhere else to go — namely, protagonists Makayla and Jesse — survive the storm, and try to make their way through the wasteland that used to be the heart of Western civilization. DiFrancesco’s speculative premise is their novel’s strongest attribute. On a macro level, All City shows a community rising out of an urban environmental catastrophe to form challenging systems of self-governance. It doesn’t shy away from this process’s pitfalls or idealize its central figures. As a piece of speculative fiction, the book certainly raises interesting questions.But stylistically and politically, this novel has glaring issues — to say the least. DiFrancesco’s antagonist is “the system” at large, the political status quo, represented either by the Paris Hilton voiced “Evann” (complete with doting father and miniature pooch), or by moustache twisting soldiers/cops/rescue workers who say things like “You people who stayed here are all like animals.” “Part One” ends with a rape scene cliffhanger. The novel’s conclusion finds no issue with valourizing its protagonist’s suicide bombing as a means of achieving social change, “In some ways it was the ultimate act of resistance.” Wooden characterizations are one thing; the stylistic and polemic moves DiFrancesco attempts to justify with an anti-oppressive political message make me nauseous.

All City is not the kind of story we need. I recommend it only to those looking for an example of empathetic politics curdling into dehumanizing ideology.