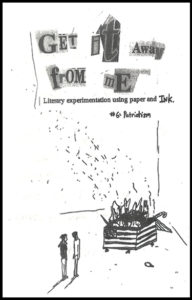 Get It Away From Me #6
Zine, Scott Bryan, 16 pgs, getitawayfromme.com

The American flag-adorned dumpster fire on the cover suggests that the theme for this issue of Get It Away From Me — patriotism — is a tongue-in-cheek endeavour.

Misguided consumerism appears repeatedly in these short stories and essays. In the best of the bunch, alien blobs land on Earth and begin devouring everything in sight, starting with garbage, then moving onto store-bought goods, and eventually people. It’s an apt, though obvious, metaphor for any number of ills currently engulfing the public.

An essay on the vilification of the “other” in American society and politics, and the many faces of moral decay that occupy the news, has the potential to stand out, but it ultimately flounders. It poses insightful questions: is immoral action in the name of morality justifiable? How far can or should one go in opposition to inequity? In the end, Bryan settles on pacifism as the solution — cue the twinge of disappointment— after an essay full of condemnation.

It’s clear that this is mostly a lark. Bryan writes sarcastic commentary as an omniscient narrator in the margins of his own work. But there was room for this work to turn sincere and provocative, were that ever his desire.