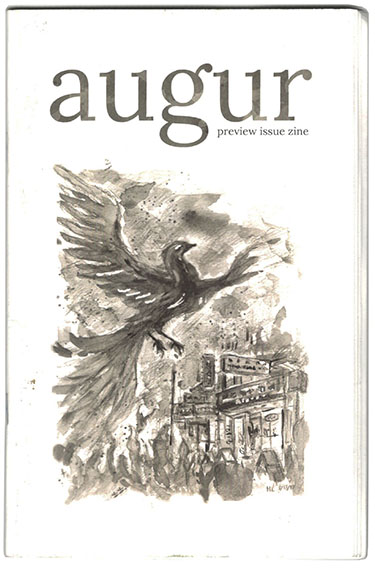 It’s difficult to tell how much can be gleaned from a preview when trying to imagine how the final product will appear. Augur has a slick online presence and held a successful kickstarter campaign, and it appears that the e-book issue of this preview was the centrepiece of that endeavour. The print issue appears to have been a kind of after-thought, unfortunately, and its merits are held down by its shortcomings.

This preview zine, physically, is a simple saddle-stapled booklet made of laser-printed A4 copy-paper. The pages are crowded with text — prose and poetry — from five different authors. Augur’s mandate calls for “fantasy/science fiction/speculative fiction” with “at least 75% Canadian and Indigenous content.” Following suit, Michael Matheson’s “change as seen through an orrery of celestial fire” introduces readers to Shurui, a mythological Fenghuang living in downtown Toronto, who uses her phoenix-like fire and rebirth abilities to rob armoured trucks as they whip up Spadina. Terese Pierre’s “leapt,” another highlight, depicts a gangland encounter at a Canadian mall, where the Canadian branch of a Ukrainian anthropomorphic jaguar gang senses some of their own kind in the parking lot, intimidating the recent immigrants Agnes and her mother into joining. “Just when I thought I was out,” echoes the ghost of Michael Corleone, “they pull me back in.”

It’s not the approach that falls flat, though, but the execution. Only three of the preview zine’s 26 pages present poetry, and the three prose pieces are not self-contained short stories, but introductions to larger narratives that might reach some interesting highlights later on, and might not. This, then, is a preview in some of the ways it shouldn’t have been — I’ll check out Augur upon its release, but not because of its presentation here.