The Greatest Stories Ever Told has a really great premise 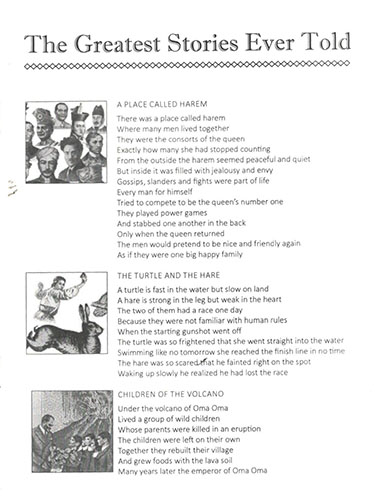 The Greatest Stories Ever Told

That’s a bold claim, for a book title. If nothing else, The Greatest Stories Ever Told has ambition to spare. In 2015, Creator Ho Tam started with a set of poems in English and has since been translating them into other languages, redesigning the format with each new edition.

All of these poems emerge from the images that accompany them, and the associated collages are taken (at least in part) from the currency of various countries. The astronaut and Canadarm2 from Canada’s five-dollar bill hover over a field of flowers in “The Hanging Garden,” for example: “There was a hanging garden in the sky … People believed that the garden / was a gift of the gods / So they sent the purest youths / as gardeners.”

The copy of The Greatest Stories Ever Told in review, here, is an eight-page preview of the full-colour illustrated edition; samples of the longer version are online, and Tam’s collages do look exquisite in the full edition. The poems (Tam refers to them as stories), however, don’t quite measure up. They’re brief (which is not necessarily a disadvantage), but Tam fails to deliver any depth in the brevity. His extrapolations from the images are often clever tangents, but at their core, these poems come across like tales or legends with no core message.

Get this for the artwork or the premise — it’s currently available in nine languages. The writing alone doesn’t justify a purchase.