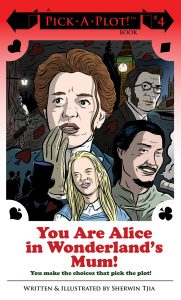 You Are Alice in Wonderland’s Mum!

I was only on page four of this Choose Your Own Adventure-style book when I realized it’s going to be a lot more debaucherous than expected.

What tipped me off? My book husband, Reg, asked if I’d “fancy a tussle.”

Picture me clutching my pearls.

It’s 1862 London and you, dear reader, are at the helm of this story as protagonist Hannah Liddell. Your daughter, Alice, has gone missing and you venture into the night through London’s seedy underbelly — filled with opium dens, madames, and pedophiles — desperately searching for her.

My first read through, I followed my page choices strictly, only to reach an unsavoury end involving a brass statue of a mongoose. I faired no better on my second try.

All bets were off after that. I mean, the opening instructive poem did say “Reincarnation can be exploited” — and boy did I ever exploit it. I suggest you do the same. With 13 radically different e n d i n g s , i t ’ s a b o o k w o r t h a re-re-re-re-read.

However, while fun, the story does take dark turns into the realm of pedophilia (don’t worry, not explicitly). This may seem totally out of left field, but it’s because the book blends historical fact and speculation with fiction.

Some scholars say Lewis Carroll, author of the original Alice books, was a repressed pedophile. Whether this is true or not, this context is present in Tjia’s book. What’s more, the Alice Liddell of the original series was based on a real little girl that Carroll was close with. It’s this real-life Alice, not the Wonderland one, and her family that we find in Tjia’s book.

It’s compelling to see how Tjia characterizes historical figures, and figures from fiction, but it can also be confusing if you read too much into it — especially when historical figures who were (we assume) relatively sane are turned into total psychos.

Needless to say, I wasn’t expecting any of this when I picked up the book for a fun read.

If you’re nostalgic for the Choose Your Own Adventure books of your childhood, Tjia’s is worth a shot. The writing may not floor you, but it’s what books of the genre are supposed to be: page-turners, and with the added benefit of Tjia’s illustrations.

My only real complaint is that there wasn’t a steamier resolution between a certain pair of characters. But for anyone else who also felt cheated, be sure to read the acknowledgements for an easter egg.