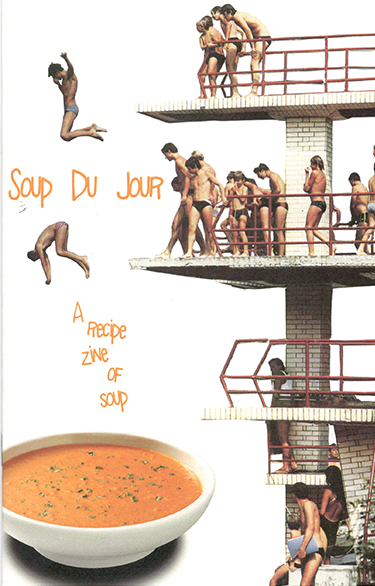 It’s too bad this review won’t hit the press this winter — is there anything better for the cold months than soup? I assume that’s the sentiment held by the duo behind this short cookzine, Bbtorchia and Dartgarley, who provide ten recipes. More slick than Soy Not Oi!, the scrappy cookzine of yesteryear, Soup de Jour is a full-colour and illustrated effort and, with the exception of one recipe that is described using a screen capture of an IM chat, adheres to a fairly standard recipe format.

Despite our authors’ unusual names, these recipes lean toward the WASPy or European palate including Grandma’s Corn Chowder, tomato soup, French onion soup, and borsch. While the culinary choices themselves may not be very adventurous, the zine is well executed with funky drawings and stylish collages giving each soup a personality. And there are puns! Sourkraut rock! Reece WitherSPOON!

All in all this is a fairly well put together collection. Vegetarians and vegans beware; only about half of these soups will jive with your diet. And finally, I found the start of this zine abrupt. You open it up and boom! Soup. I would have liked to see is some kind of introduction where the authors explain how they came to choose these particular soups or why this project is important to them. I rate this four out of five croutons. (Chris Landry)