In anticipation of the launching of the 2018 Broken Pencil Zine Awards, we will be presenting you with a look back at the 2017 winners. First up is the winner of Best How-To/DIY Zine!

“I have no previous experience with zine-making, or publishing for that matter, but I had collected zines and I felt they were effective in delivering and communicating a straightforward and manageable message,” explains Aitch Elle, winner of the Best How-To Zine. “I had never written anything for public consumption, nor would I consider myself a writer. But the format seemed less intimidating and I had first-hand accounts on the topic.”

Ah the power of zines! Indeed, effective and straightforward are some words to describe Elle’s zine, a best practices guide for beginner strippers and other adult entertainers, from her perspective as a queer Black feminist. It is also charming, detailed, and sometimes laugh-out- loud funny. This is elevated by the excellent illustrations and design by Genevieve Darling. 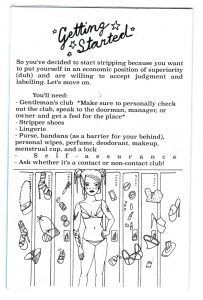 “BBHMM was born from the persuasion of my partner to share my experience as a sex worker. He observed my gaining the most money I’d ever made in my life, but also my anger and frustration with the sex industry,” Elle says. “I never believed anyone was going to be ready to hear about the experience of a Black woman… I was slow at the beginning, never really believing I would publish it. But as I continued writing, I started to see something important take form and I took pride in knowing I was sharing honestly an aspect of myself.”

Zines have long been a way of sharing crucial information in safer and community-driven ways, and this is the precise reason that the How-To category was important for us. Elle says that folks have already reached out to her directly to tell them it helped them get their footing in the industry and that she’d love to hear from anyone else who it has helped. As for what’s next for our Best How-To Zine winner? 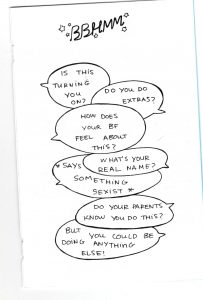 “Maybe I would try my hand at an autobiographical zine,” says Elle. “It would be about a child of mixed heritage, who grew up in poverty with a single parent suffering from schizophrenia, which subsequently led to years in the foster care system, who also became a stripper to find independence and wealth but all the while living with constant microaggressions, sexism, racism, verbal and physical abuse… It’ll be a cathartic experience.”

How to be homeless in NYC //

How to Recognize Voter Suppression in its Natural Habitat // By Bronwyn Mauldin (Glendale, California)