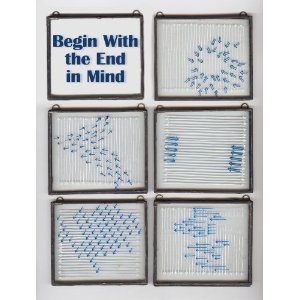 Begin with the End in Mind The title from Emma Healey’s prose poem collection comes from Stephen Covey’s self-help blockbuster, 7 Habits of Highly Effective People. Healey, at 21, must have taken close notes, because she’s accomplished quite a bit in a short time: her work has been anthologized twice; she’s the founding editor of Incongruous Quarterly, an online literary  journal devoted to publishing the unpublishable and she won the Irving Layton Award for Poetry in 2010 and was shortlisted again in 2011 and 2012. Highly effective, indeed.

The collection opens with a series of pseudo-biographical prose poems. In the first, “Everything is Glass,” we learn her full name is Emma Flannery Lawrence Healey, that her kitchen floor contains an astonishing amount of debris, she can see through walls with her blind blue eye, and her mother either gave birth to her before she was born, or was in labour for more than a year before bestowing this impressive name — the reason for which, despite repeated promises, remains a mystery. (A mystery to this collection, at least. Healey was the cover story for issue 55 of Broken Pencil, where she reveals the origins of her name, among other things.) The result is a bit confessional, a bit surrealist, a bit Miranda July, and very New Sincerity. The sequence titled “Heritage Moments” plays on the Heritage Minutes that used to air on CBC and CTV. The first says, “There are many things in this world which you may already know and love — bonspiels, alacrity, insulin, Ryan Gosling — but were you aware that most of these things are Canadian?” The bold text playfully emphasizes our agonizing readiness to adopt any achievement as a personal badge of honour, though most of the “moments” contained within demonstrate a close familiarity with the expression “poetic license.”

The title poem stands out for its depiction of a boy reading on the subway, as the protagonist of the poem reads the boy reading on the subway. Its rhythms and repetition, as she flips from the boy to her inner monologue, is both striking and oddly soothing. These poems dance and ramble, propelled by an earnestness that can’t help but charm. I will await her next collection with alacrity. (Nico Mara-McKay) begin with the end in mind