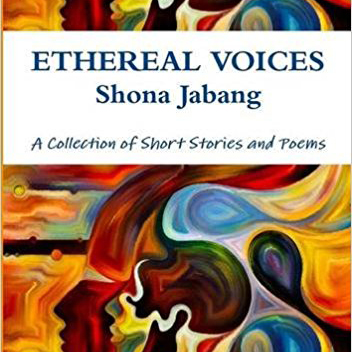 Shona Jabang’s collection of poems, essays, and short stories transports you from Jamaica to England, to the United States and The Gambia.

Ethereal Voices opens with “Sister, Sister” where a young Pearl’s enchanted relationship with her mother is ruined by the birth of her sister, and she is left behind in Jamaica as her parents migrate to England. The story anchors the book, exploring primordial emotions, complex family dynamics, and how citizens (victims) of colonialism are often reduced to marching around the world in search of “something better.”

The most notable story is “The Dream” in which a 13-year-old girl, whose mother had her at age 11 and mysteriously abandoned her, is sleepwalking and taken by her grandmother to see the obeah man, unraveling a horrifying family secret.

The stories, sometimes taking the form of verse or poetic memoirs, weave together themes of migration, violence, and returns, often punctuated by poetic lines, such as “She was Eve opening Adam’s eyes” and “She is Universe. / The sound the planets hum when they are at peace. / She is cosmic cohesion and the Force of Gravity / She is simply, My Grandmother,” as seen in “Gran,” a stunning elegy that displays the immeasurable strength of diasporic grandmothers touched by the Trans-Atlantic slave trade.

Jabang discusses colonialism, gendered violence, class, respectability and shade politics rampant in Jamaica. Readers are taken to other times and places such as the U.S. in the 1920s and 9/11. Instead of presenting the usual Caribbean, Jabang paints a complicated picture of Jamaica and diasporic living that attempts to grapple with what it means to be Caribbean and British. Characters struggle with their relationship to the Motherland, which, no longer Africa, has been replaced by England.

One should be warned, however, that Jabang undoes her good work a bit with her penultimate piece, a two-part essay, which sheds light on the living truth of the forgoing stories. (Fiona Raye Clarke)