As soon as Lulu walked into my apartment I knew she was pregnant. I have this weird knack for knowing when women are pregnant. It’s a useless superhero trait; the gift of sensing when another life is starting to kick around. It’s not what you think — it’s not that pregnant women have a glow or anything. I can just sense something. I also know what sex it is but I don’t think that’s much of a talent. You have a fifty per cent chance of being right (or wrong) in that regard, unless the baby is a hermaphrodite and that’s pretty much a statistical impossibility.

Superhero gift or not, Lulu was pregnant. But Lulu didn’t have a boyfriend and hadn’t for a while. I knew Lulu would lie if I asked her flat-out whether she was knocked-up. She liked to lie. Mostly I could tell when she lied because her answers became really short — just “yes” or “no.”

Lulu and I went to high school together, but we didn’t really know each other back then. Apparently she knew who I was though, which is kind of weird because she was super popular. If our school had had a cheerleading squad she would’ve been on it. I wasn’t popular, but I was too cool for dorky clubs like the chess club or the A/V club. At lunch I stood in front of the school and smoked with my friends. We always dressed in black.

Today, Lulu walked into my apartment and flopped down on the couch and flipped on the TV like she always did. She didn’t have cable and sometimes I think her visits were more about television than any real desire to see me. The odd thing was she never watched any particular shows, she just flipped around the channels like a man.

“Not much. What’s new with you?” I asked, hoping she might reveal herself.

“Nothing! My life’s boring.”

She was lying very well. For a moment I considered the fact that she might not yet be aware of the baby.

Bob, my boyfriend, is a bit of a goof. We’ve been dating for about a year but we just don’t seem to be going anywhere. We’re more aimless than drifting clouds. At least clouds cause thunderstorms once in a while. Bob and I don’t ever fight, not even a little bit. Usually we only see each other on weekends. We used to go to movies but I always ended up having to buy the popcorn so I decided we should just rent videos and stay home. Popcorn makes me feel sick.

We still have sex but it’s pretty uninspired. I get on top, then he gets on top. It never takes very long and he falls asleep right afterward.

I’ve been suspicious for a while now that Bob and Lulu are having an affair. I don’t know whether you could even call it an affair, though, because Bob and I aren’t married and I can’t recall us ever talking about being exclusive. I’ve just always assumed he was too lazy to go after anyone else.

“Looks like it’ll be nice tomorrow,” she said. Clearly, she was watching the weather channel.

I was in the kitchen. I ignored her and called out: “Lulu, would you like a glass of wine?”

I walked into the living room. “What do you mean you can’t?”

I sat down on the sofa beside her and took a sip from my own glass.

“You and Bob are the only people I know who watch that channel,” I told her.

It took me a minute to collect myself. “Well, it’s just that the weather forecast is so often wrong.”

I watched the TV while she flicked around. I was emboldened by the wine.

At first she didn’t respond. She just kept flicking from one channel to the next. After a moment, Lulu looked over at me, her pupils big enough to overtake the blue of her iris. “What on earth are you talking about?”

“I know you’re pregnant and I know it’s Bob’s.” I sat back in my seat. “Since you have betrayed me, I want you to give me the baby. By all rights I should be having a baby with Bob.”

“Have you lost your mind? Why on earth would you even think I’m pregnant?”

“I can tell. I know these things.”

“Then you should also know that there’s no way you’re getting my child.”

“Lulu, you’re alone, you travel all the time for your job and you never stick with anything for longer than a minute. You even had to give away your cat because you were never home! Why force yourself on a child? You know I would be a better mother.”

She put the TV remote on the table and stood up. On the way to the door she said, “I haven’t decided whether to keep it or not.”

On Saturday I made Bob meet me for brunch at the Bloor Street Diner. He probably thought I was going to try to talk him into seeing a matinee, but instead I steered him towards Baby Gap.

“This stuff is ridiculous,” he said from behind me. “Why would anyone pay so much for something a kid will wear for about a month? It’s crazy. Why not get something from Wal-Mart?”

I rolled my eyes at him. “It’s a gift. I want to make sure it’s nice.” I picked up a little pink sweater that came with a matching hat. “This is adorable!”

I shook the pink sweater at him. “It’s going to be a girl. I can just tell.”

He followed me over to the lineup extending out from the cashier and said, “Well, what are we gonna do now?”

The phone rang a couple days later. I answered it.

“I think you might be right about the baby.”

“You’ve been thinking about what I said?”

I walked around my apartment cataloguing the things I would have to change. The glass top of the living room table would definitely have to go. The crib would fit at the end of my bed if I moved my dresser and I could put one of those swinging baby contraptions by the window in the living room.

I pictured myself getting on the elevator while my neighbour held the door and helped me with the stroller. I would go to the park and people would gather around and coo about my cute little baby. At night when she cried I would hold her in my arms and let her sleep beside me in the bed.

I stood in the hallway with the phone at my ear and waited for Bob’s machine to kick in. I was holding the pink sweater in my hand. I raised it to my nose, wanting that new baby smell, but there was only the stink of new clothes.

“Bob, it’s me. Sorry to be leaving this on your machine. I don’t think we should see each other anymore.”

Kerri Leigh Huffman is a Toronto writer whose poetry and short stories have appeared in The Fiddlehead, Kiss Machine, CV2 and the Hart House Journal, among others. She recently published Suite of Desire, a chapbook of poetry. 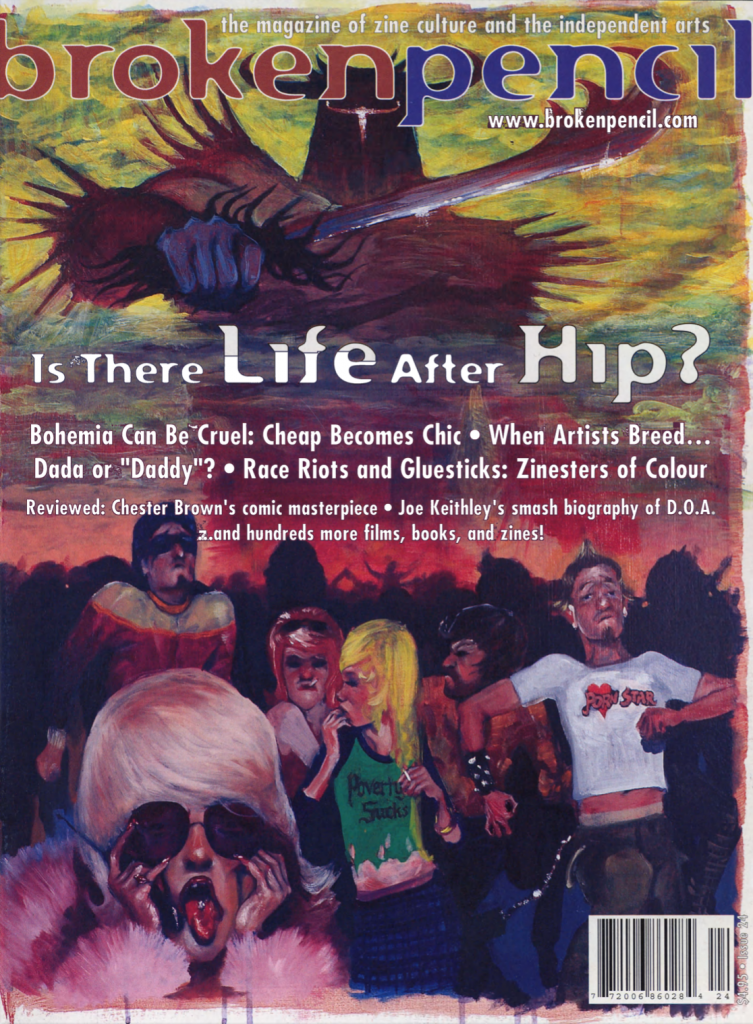