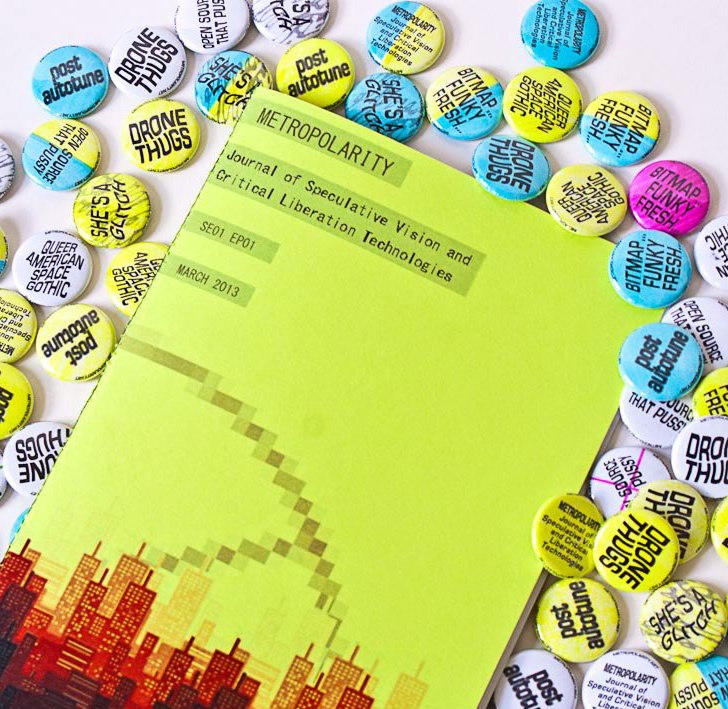 Metropolarity is a Philadelphia-based sci-fi distro, community organization and “time travel startup” that engages artists, activists and futurists to study the intersections between technology and community. In their own words: “We choose science fiction as our lens to create new worlds, identities, self paradigms, and to destroy old, harmful ones.” Visit them online at metropolarity.net

We at Metropolarity came together one pixelated summer in need of a space where we could voice our apocalyptic concerns for our city and our community. We looked around us and saw hyper-surveillance, corrupt policing, rampant dehumanization, and corporate domination. We saw that we were living in a true dystopia. But within that space was love, community, stories, and liberation. Here was the paradox within our city–beauty, and destruction. Screaming voices, and sanctioned silence. This was Metropolarity, a collision of truths in the metropolis, founded by four wayward writers looking for a way to converge in a fashion that mirrored the science fiction reality we were living.

Initially, we had the idea to compile an anthology of Philly-inspired science fiction stories, but this idea seemed flat in a way. There were hundreds of science fiction anthologies in existence, and the stories stayed locked between those covers. We knew that narrative was a living entity to be embodied and empowered, so we decided to start a zine: Metropolarity’s Journal of Speculative Vision and Critical Liberation Technologies. We thought a zine exemplified the DIY nature of the work we wanted to begin and had already begun in our communities, as well as the critical nature of our messages. We felt zinemaking was a unique form of media that we had complete control over in its creation, distribution, and use. We could print them as needed, include artists we admired, scatter them on the subway, and connect with a whole network of zines and zinemakers internationally. 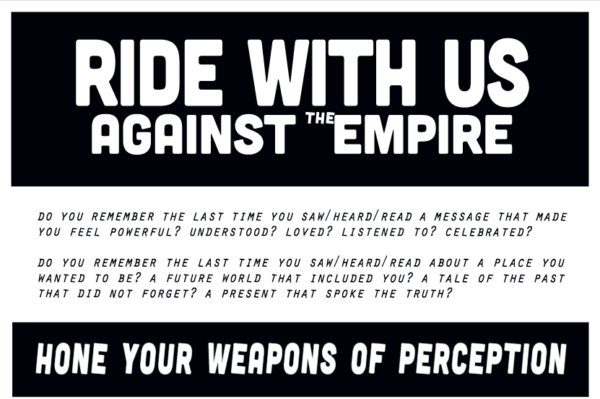 Additionally the format of the zine itself was an important communication choice for us, rather than say, host our bodies of work online, on a slick tablet-optimized website as a web magazine PDF or something like that. A physical item that can be held, owned, pushed against the skin, and objectified, inevitably becomes imbued with meanings that its owner creates and fosters. We wanted people to have them, we wanted to see who had them, and maneuver for visibilities (our way of flesh-world digital tracking.) It is in this way especially––with pictures of our zines, the objects––that we are able to represent ourselves online, amidst the associations manifested between the physical objects and the specific people & environments pictured with them. Perpetrating a zine thusly feels clandestine, like a succumbing to current social controls which coerce our participation in surveillance culture, data tracking, and identity-by-brand-association learning algorithms of Google’s young artificial brains.

Here we want to acknowledge our respect for the potential of written word, of which our zines are comprised (as opposed to only pictures). Written language becomes a fixed object in the ebb and flow of spacetime. When we arrange and set our words down on a platform, we encapsulate an experience, which someone else encounters at a different point and unknown orientation of spacetime. Our written word remains assembled, complete, not receiving any new information. In that fixed form it encounters all manner of fluid individual. What happens during the interaction between the fixed object and the fluid person? Does the fluid person incorporate any information from the fixed object? Does the fixed object then join an assemblage of other fixed objects, becoming part of a larger construction with a different meaning? What is the third thing which grows betwixt two?

This thought reflects the nature of our spirit. We are four science fiction writers of differing styles, afflictions, and affects. At the first Laser Life*, after we had all read our stories in succession of one another, there was a realization that something powerful had occurred. We felt it. Our audience confirmed. We made our first zine because we wanted to attempt to encapsulate what was happening at our events and see if its effect would be remotely as potent. Then we intentionally gave it an overwrought title like that of an academic journal to purport our own importance among those who would otherwise ignore our efforts (low culture obfuscation technique #260). In this way we manifest space for ourselves in places we would ordinarily be denied. Please copy us. (Metropolarity Collective)