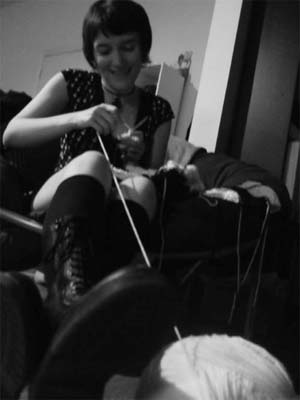 Like a lot of women my age (mid-to-late-20s) I grew up around teen magazines such as Seventeen and YM. Shameless didn’t exist when I was young and impressionable, and I didn’t find out about Reluctant Hero until I had grown out of those teen glossies anyway– since17-years-old are actually too old for Seventeen magazine.

Yet, even between the ages of 12 to 16 I felt guilty looking at teen mags. To me, picking up these magazines carried the same sort of shame as reading the National Enquirer. I wouldn’t be caught dead buying one (I made an exception the time Hayden was profiled in Seventeen, but even then at the check-out I talked loudly about hating it and when I got it home I hid it in my closet). It was only in the privacy of my friend Karen’s bedroom that I could busy myself taking the quizzes and admiring the hair, make-up and fashion featured in their shiny pages. Looking back on my formative years, I think it was partly the guilt of a budding feminist, partly the result of not wanting to be lumped in with the girly-girls I went to school with, and partly the reaction of someone who was beginning to feel camaraderie with the world of counterculture. Instead of buying blindly into the images of skinny, beautiful girls, I was busy buying the notion that liking these magazines meant that they had won. After all, they were selling me what men (boys) expected us to look like. While of course there is much truth in this (I experienced this first-hand when an early highschool boyfriend broke up with me when he realized I’d rather wear oversized t-shirts and giant sunflowers in my hair than dress like a non-assuming “pretty” girl) the greater truth is it was the girls who really cared about what other girls looked like. I was proof of this, as I judged all the popular, prim and perfect reflections of these teen mags that walked the hallways of my school. I didn’t like them. They had different values than me, I thought, and they were superficial ones.

I hid my own superficial fun in Karen’s room. Under the gaze of the Calvin Klein models and multiple Drew Barrymores that covered her walls, we followed instructions on how to do each other’s hair and took pictures of the results. Once I stepped outside her door, though, there was no way I’d let anyone know that I actually kinda cared about what I looked like.

Luckily, now that it’s time to edit the Style issue of Broken Pencil, I realize it’s okay to like clothes. It’s not superficial to be “girly” and take such a deep interest in clothing to actually learn how to knit or sew. It’s just being honest.