Online Exclusive Fiction: After Happily Ever 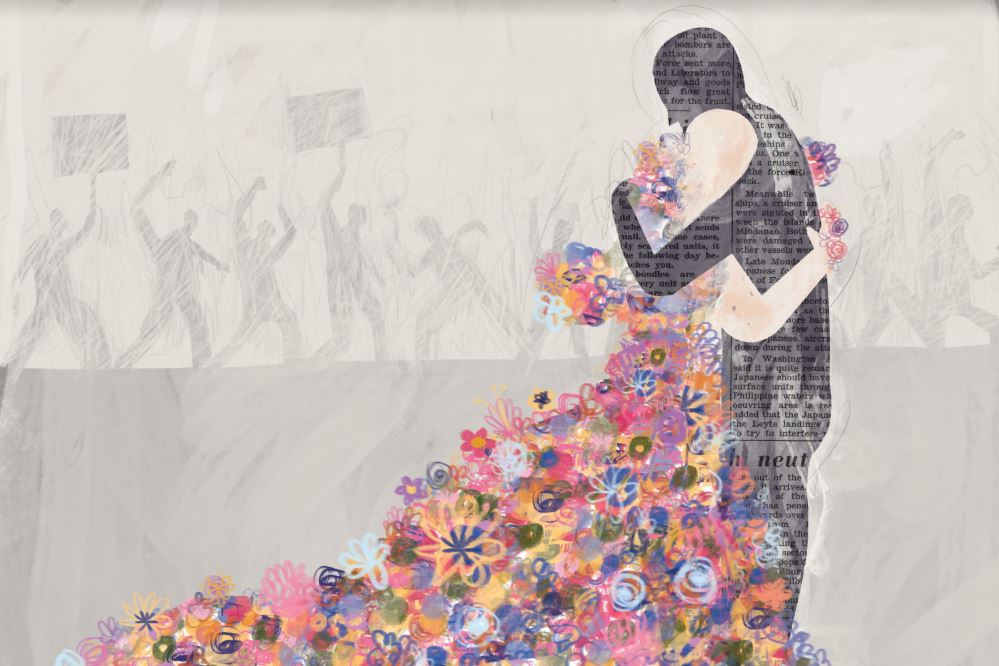 WELCOME, welcome! Welcome to the biggest day in the History of Me, which also happens to be—apparently—a big day for the rest of you.

When I was little, Dad thought I’d be a PhD. The teachers told him I was smart and, next to that, no other thing could possibly matter.

He’d drop into a squat, his face squinched and expectant, like he was ready for a fastball. If I was to write a Complete History of My Childhood, it would be a flipbook of my father’s ever-more-frustrated expressions of encouragement. “YOU’RE SMART, ANNY. YOU CAN DO THIS.”

For a while, the sentence was like a smack, and I’d try harder at whatever I was doing. I would say to myself, like a train going up a mountain, You’re smart, Anny; you can do this. You’re smart, Anny; you can do this. Then, around my ninth birthday, the word smart ceased to mean. A switch slipped, and the electric current of sense ran in a different direction. Smart became a series of nonsense sounds that began with sss and ended in a sharp, dismissive teh.

At eleven, the word came alive again. Smart was a secret superpower, which would vanquish all evil, if only I could learn to wield it. Frankly, I would’ve preferred a different superpower. Invisibility, for instance, or Time travel, or being considered “Pretty.” I watched an old flat-box TV series that year in which the characters were all struck by magical lightning, giving each a specially tailored superpower. I wondered: What if magical lightning struck me? Would I turn into the Smart Young Lady Daddy’s Been Waiting for All These Years? Were smarts really buried—like a nut—inside me?

“I didn’t have to have been,” Dad said. Mama frowned and huffed.

I don’t remember if Mama had an opinion on my alleged smarts. Mostly I remember how she twirled my hair absent-mindedly while doing something else with her other hand.

It was on a day like today—a 14th of May—that Mama disappeared. She had a bad pollution allergy, and she was sneezing something wild that morning. Mama’s sneezes weren’t polite ahh-choo!s. They were choking, gasping roars, followed by rivulets of gooey snot. “I’m sorry,” she’d say. “Sorry.” Then she’d cuss quietly as she lifted a tissue to her nose and pinched. She was too feminine to “blow.”

She was at work that day, until a few minutes before 6. She rode the freight down to the Sinochem-10 lot. They told us she swiped her destination—home—at 6:07:32 p.m. Because of traffic, the car routed her to I-94. She’d just passed the 11th and Nicollet exit when the car’s navigational system seized up. Emergency lights flickered on, and the AI ordered her to pull over. It told her a second time: “Pull over.” And a third.

Mayya Hanoosh ignored this command, the police report says, as if Mama had sat there, arms crossed, tongue stuck out. But I can picture what happened. Mama was wiping her blurry eyes, one hand searching for the controls. Her head yanked back in another violent sneeze—ahh—and the car swerved and struck a pylon.

May 14th, after school, I was in an empty house. I’d done my seventh-grade homework, more or less, and was bored. But instead of going into the kitchen, I went to my parents’ bathroom and took out bottles of pills. I swallowed about nineteen aspirin. It didn’t feel like anything.

Nobody came home at 6:30, or 7. I called Mama’s phone a few times, before I ate standing up by the fridge. I called Dad at 8, even though he hated getting “personal” calls at work. He called back at 8:47, just as I was growing feral with worry; talking to myself; running up and down the stairs.

At the funeral, I heard him whisper sharply into Mama’s cheek: “Why didn’t you pull over?”

The next 14th of May—the first birthday of Mama’s death—I went back to the medicine cabinet. This time, I took enough to make me nauseous and greasy and itchy all over.

Next one, I was fifteen. After two different bottles, I felt so wretched I called an ambulance. Dad was out on a date while I was having my stomach pumped. He came to the hospital in his fancy dress shirt, and smiled stiffly each time a doctor stepped in. He explained that my mother had died, and I wasn’t quite coping. But I was a smart girl; I’d learned my lesson.

It was on a 14th of May when I told Dad I wouldn’t be considering any of the fancy foreign universities that he’d hand-picked for me. Four years later, I told him I had failed to complete at our local college. I was probably smiling when I said it.

Yes, yes, I was also embarrassed. But wasn’t I free? After all, I hadn’t chosen Correct Door #1, Less-good Door #2, or Adequate Door #3. I hadn’t chosen any door at all.

Dad gave me a long, chilly talk after that. There were a lot of words, but you could’ve boiled them all down to “YOU’RE SMART, ANNY. YOU COULD’VE DONE THIS.”

In retrospect, maybe I could’ve. Graduated. But I didn’t, so maybe I couldn’t. Soon after, on a day that wasn’t a 14th of May, Dad married Anya, and I was one of the ushers. I was wearing a smart-looking suit. I didn’t have a date, and that smarted. But I was—for once—not a smart-aleck, and Dad smiled smartly the whole ceremony through.

When Dad first met Shadi, I was careful to arrange it for a May 14. Despite that, you could tell that Dad was not pleased. We ate at a cute little falafel place in the Pearl District, which I’d thought maybe Dad would love. Mama used to make us amazing Lebanese salads, and, as far as I remember(?), they were Dad’s favorite. But he disinfected the table before he even sat down.

Then Shadi started to ask him funny questions: what imaginary sport would you play, if you could invent any ability? What book do you want to read, that hasn’t yet been written? Dad swatted the questions away. He had no patience for that sort of thing.

You can already guess what Dad told me later on the phone. “Anny,” he said. “You’re smarter than this.”

“Am I?” It was a serious question.

A few days later, when Shadi asked if we could get married—like, ball-and-chain, hook-and-sinker married—I thought he must be joking.

Shadi had once loaned me a book called Death is Hard Work, and the book said love is like a bouquet of flowers floating down a river. You had to snatch it up at just the right moment, or else it would float on by, lost to you forever.

“But what if it only looked like a bouquet of flowers?” I asked him. “What if it was actually some bit of old trash bobbing on the surface of the river? And what if—after you’d fished it out and clutched it to your chest—you had to keep that slimy wet trash forever?”

On the day Shadi proposed, he brought in some rotted flowers he’d pulled out of the garbage and stuck them in a vase.

Yes, I said. Let’s get married.

Like everything important, I scheduled my wedding straight away, for the 14th of May. I was on the bus last Friday when I told Dad, who only half-listened to the reasons I wanted to get married. I told him I would marry Shadi in a box, with a fox, in the rain, or in Spain—with a cat, on a mat, and in no-time-flat. Dad’s voice shook. He told me to shut up for once and listen. Then the bus stopped, and two police officers stepped on. It was a cold and ashy night, and they told us to turn off our phones. “Routine check. Step off the bus, Ma’am.”

You won’t believe this, but they discovered a severed hand on the bus! In a plastic bag! They had to question all of us, one by one, and it took forever. They arrested one woman who had a teenage daughter, but I don’t think she’d have cut off the hand.

I called Dad as soon as I was on the next bus, but he didn’t pick up. Fine, I thought, okay, maybe he’s gone to bed. I shoved the phone into my purse and knocked my head against the glass all the way home.

For the rest of the way, I was thinking about the dead. There are so many more of them than there are of us. And each of us will be dead a lot longer than we’re alive. We’re alive only a few fleeting seconds, and then we’re dead forever.

So here you all are—by accident, most of you—and welcome to our wedding! Thank you so much for your participation, and don’t be freaked out by the photos of the dead. That’s Louisa carrying Mama, and my friend Neda carrying my dad. I invited Anya to carry it, but she just shouted at me and blocked my number.

Dad didn’t call me back, after our argument about the wedding. But who calls back on a Saturday morning? I was sitting on the couch with Felix, drinking a cup of off-coff, when my phone buzzed. I glared over at the bed, as though Shadi might be buzzing, just to annoy me. But he was still asleep. I stumbled over to the table and flipped my phone. Anya?

Fuck’sake, I thought. Were they tag-teaming to talk me out of getting married this early on a Saturday morning? Why couldn’t Dad just be happy? It was supposed to be smart to get married, wasn’t it? That’s what the analysts said: “Young people these days, they’re not smart enough to get married.”

I flopped down on the couch, cradling the phone, and elbow-spilled my coffee. Shit. I dropped my phone. Double-shit! Our hedgehog rolled up into a ball, and I shouted at him, the phone, and the spilled off-coff. Shadi got up out of bed, his hair sticking up, and I shouted at him, too. My head hurt. Why had I drunk so much last night? Just because the police had found a hand on the bus? Because I’d argued with my dad?

Shadi sleepily helped me clean up the spill. He picked up little Felix and put him back in his crate. My phone screen had sprung a crack, and I ran a finger along it as a message came through. “It’s urgent.” After that, my body went cold, and I watched myself disappear.

I moved around the next couple days like a zombie. When the protests started up on Tuesday, I was wandering around the apartment, muttering to myself, You’re smart, Anny. You can do this.

And so I asked myself: What would Dad have wanted me to do? Stay home and light a candle for him? Never. The doing had to be done. So here I am—with this megaphone—getting married. I think we can hear people at the detention-zone fence, trying to push it down. Our minister, a friend of my mom’s sister, is about to begin. Please pay him what attention you can spare as I hand him this megaphone.

“Yes,” we shouted back at him as we were jostled by the crowd. Someone stepped on Neda’s foot, and she shouted at them not to crush my dad’s picture. “Have some respect!”

The foot-stepper looked so confused that I laughed, and the minister declared us wife and husband. After that, we danced in the crowd—Shadi and me and a million of you—after happily ever. 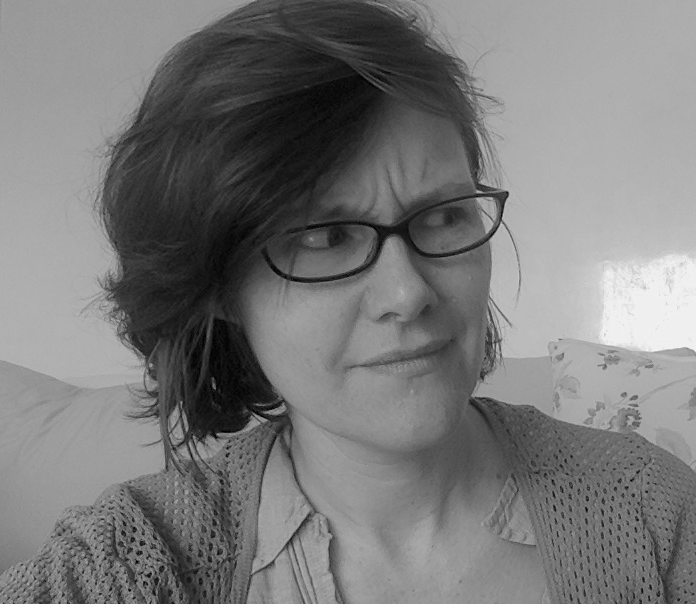 M Lynx Qualey is a writer, translator, and critic who edits the ArabLit website (www.arablit.org), the ArabLit Quarterly magazine, and is co-host of the BULAQ podcast. Her translation of Sonia Nimr’s brilliant Wondrous Journeys in Amazing Lands is forthcoming from Interlink in fall 2020.