‘I’m in therapy, you know,’ is the first thing that comes out of Ellery’s mouth while lying across my bed. Her fingernails are bitten down far enough that they must have been bleeding and she didn’t take off her dirty sneakers before hopping onto my sheets. ‘It really helps. But I don’t want my parents to think they were right so I’m giving my shrink the silent treatment.’

‘I see,’ I say, chewing on a pen cap. There’s a pad of paper on my lap but I have no idea whether or not I’ll use it. Ellery just showed up at my house and told me she needed to talk.

‘Last night my family was having dinner and my dad coughed a little blood into his milk.’ I’m no where near qualified for this. ‘All he would say was “don’t grow old”.’ But she knows being friendless means I have no one to repeat this to.

Wednesday nights are when we decided she should come over. I tell my mom I’m Ellery’s biology tutor. ‘Don’t be silly,’ is how she responded when I asked if I should be getting paid. But I guess it’s ok. It will give me something to do every week. And I just have to sit in my bean bag chair and promise I’m listening.

Ellery is sitting on the edge of my mattress with her legs crossed. She was telling me that her birthday is in a week. How she’s never had a sleepover party. And she wants to lug sleeping bags to the roof of the minimart and spend a whole night up there getting wasted, but some of her friends are chickening out. Now she’s just silent and flicking at her bicep. ‘You know, my dad’s forgotten my birthday three times before.’

I tell her, ‘it sounds like you’re parents don’t love you very much.’ Once the shock wares off she punches me in the eye and tells me I’m only supposed to listen. I couldn’t help it though. Ellery ignores me outside of our sessions. Yesterday between classes I was walking by her locker, she has the whole inside of it spray-painted pink. I just say hi, but with one of her friends three feet away she asks, ‘Do I know you?’ It really pissed me off.

I’ve learned a lot about Ellery over our weeks so far. ‘Last year I put on a little weight and my mom told me that throwing up is okay if you only do it sometimes,’ I found out over a month ago.

One time she tucked herself under my bed sheets to say, ‘I keep having these dreams that all my best friends are dead and because I’m not I’m a huge sellout.’

And in our latest session, ‘before I even got my period my older sister used me to test that tampons would fit in okay.’ It’s all becoming very familiar.

It’s near midnight and Ellery won’t stop talking. And she won’t talk about anything important. She’s wearing a dark t-shirt with buttons pinned to it naming bands I’ve never heard of, and a red and black undersized kilt. ‘This is where I want my tattoo to be,’ she pulls her skirt down near her crotch. I see the top of her pubic hair.

When I ask her to show me again she tells me to get bent. I can’t stop thinking about it. ‘Is your boyfriend still driving you up the wall?’ I ask, trying to glimpse as high up her skirt as possible.

Ellery is dating this guy named Casey. He got kicked off the school rugby team for getting drunk before a game. It was the throwing up before half-time that tipped off the coach. Ellery told me that Casey’s been waking her up in the middle of the night with phone calls to complain about how bored he is with school and his home and his youth.

‘No, he’s been alright lately,’ she says, covering her legs up with her arms.

In our next session Ellery is wearing jeans and a baggy sweater. ‘Isn’t it a little hot?’ I ask. I’ve been thinking about her all week.

‘Whatever,’ she’s dragging her eyes along my wall paper, wasting time like she’s forced to be here. So I start, asking if we could be real friends. And Ellery asks ‘then who would be my therapist?’ stopping any hope that she might get to know me. I might as well start calling Ellery names or pulling her hair. I have no other plan to woo her.

As I drop into my seat Ellery exhales at the top of her lungs. Even with coffee on her breath she looks like she might pass out at any second. ‘I need to talk about my mom.’ Ellery’s been going through a period of stress-induced weight loss. She’s getting unnervingly thin. ‘If she tells me I’m starting to look good one more time I’m going to lose it.’

Mid-rant, I cut her off with a need for the washroom. I take an extra minute to splash water on my face and when I come back Ellery is sleeping. I just look at her for a second or two. ‘Casey’s still keeping you up, isn’t he?’

‘That would be nice,’ she rolls away, folding my sheets over top of her.

I’m pacing back and forth in the hallway that leads to the school’s back doors. Casey should come in from his smoke break soon. My pants keep trying to fall down as I tread because I forgot a belt today. ‘Casey!’ he finally comes inside and is almost a foot taller than me.

‘Hey?’ He says it like a question, because he’s never talked to me before.

‘Hey, uh, I’ve, so, I’ve been talking to Ellery lately.’ Casey smells like he’s been smoking cigarette filter, like he didn’t want to stop after the tobacco was gone. ‘I just want to give you a heads up.’ His eyes start to pinch as he looks down on me. ‘She told me, um, that she’d consider, maybe, cheating on you if it wasn’t such a faux-pas.’ My fingers are doing a nervous kind of itsy bitsy spider. ‘I don know, if I were you I’d try to find someone else.’

Of course, he thinks I’m just being a lying jerk so he bangs my head against a locker and walks off.

It’s Thursday and Ellery is at my door. ‘Did you talk to Casey today?’ I didn’t think this would trace back to me so soon. I suck in my lips to keep from talking. ‘He pointed you out and accused me of sleeping around. I had to tell him I don’t know who the hell you are.’

I don’t make eye contact, ‘But all you ever do is complain about him,’

Ellery shoves her fingers into my chest, ‘You’re not allowed to talk to other people about me.’

‘Don’t do this to me,’ she pulls my cheek forward, making me look at her. ‘I need you.’ And then my face starts twitching as I try to hold down my smile.

‘You know, it’s not supposed to be a happy story,’ which I understand, but I’m having trouble concentrating. Ellery is braless, and her sweatshirt may hide the fine details of her chest but it still exposes her natural shape. And listening to her talk about the fourth grade, how she overheard a teacher making fun of her reading attempts, made her sound so adorable.

‘Sorry, I’m a little distracted,’ I shake off my grin.

‘Well focus on me for another hour.’

After school today I follow Ellery. It’s the only way I can spend extra time with her. She just walks straight to her home. The place does have a fresh paint job but some of the windows are falling apart. After assuring myself that she didn’t see me I start to worry that she’s turning me into a crazy person.

There are a million reasons to do it.

Because after weeks and weeks she has become an obsession.

Because she’s the only person who tells me her secrets and all I am is a service.

Because as long as she considers me her therapist we’ll never have a real relationship.

Because this girl has been hurt so many times it shouldn’t even faze her.

In first period I tell Kristen Hansen that someone found Ellery’s diary on the change room floor. ‘Is it true the two of you used to flash your older brother for candy?’ Eight other students are in earshot.

‘In grade two,’ she pushes through her clenched teeth.

In the hallway I find Aster Tem and say that Ellery has gone through four different therapists since she was 13 and if Ellery could go back in time she would have lost her virginity years ago. Then off to find more high school gossip queens. Soon everyone will know her secrets and I can re-create who I am to Ellery.

She waits till Wednesday so my mom won’t flinch as she walks right up to my room. ‘You fucking asshole!’ Ellery yells after she reaches open my bedroom door.

She rips off my bed sheets. I watch her as she crawls across the almost bare mattress. Her back is arched and her legs are slightly spread and oh, thank god for the skirt as it bobs up to reveal her tight blue underwear. She climbs down the other side and tears the posters off my wall. As Ellery shouts her moist lips convulse open and closed and all I can do is imagine them moving against my neck. The words I love you run through my head. Her fists are shaking, and all I want to do is hold them, ignore the middle finger held outstretched by her arm and hold her hand.

‘Just,’ she looks around for words, ‘fuck you.’

My computer keyboard and books and CDs are piled on the floor. My ceiling fan is rocking back and forth from the picture frame that was thrown into it. Ellery’s chest is jolting up and down with quick breaths. ‘I love you,’ I finally say out loud.

She storms out. My mom is half way up the stairwell to find out what all the commotion is about and Ellery tells her ‘your son’s a dick,’ as she passes.

The couch is comfy enough but the room smells like plastic from all the fake plants. Still I know I need someone to talk to. ‘I’ve never been in therapy before but I hear it helps.’ My hand is having trouble resting on my shaking knee. ‘I think I’ve been getting a little mixed up lately.’

‘I see,’ says the doc in the chair across from me. She’s got pad of paper on her lap but she hasn’t used it yet.

‘I’ve been making some bad decisions,’ I confess. The Therapist is nodding her head. ‘If I never said a word I could have blackmailed Ellery into loving me.’ 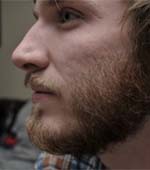 Colin Brush is a writer currently living in Montreal. He recently saved his bike from rusting through so oh joy, he can keep riding through the winter. He’s also in the midst of writing his first novel.