Zinester’s Toolkit is a new column about the tools zinesters use to make their work, and how you can use them too.

In my head, I imagined myself becoming a cool zinester with cool zinester friends. We’d sit on the ground in my messy punk house, typing out words on my thrifted aqua blue typewriter with one hand and holding a beer in the other, blasting Hole, with someone gluing paper strips of angsty words onto another sheet of paper, someone else copying the sheets of paper onto our donated Xerox machine, and then we’d have some really cool zines. But that’s not quite how it happened. I definitely ended up with some really cool zinester friends, but we didn’t know we were zinesters until we started creating together. We called ourselves Brown and Proud Press, and I compiled our zines using a variety of methods.

Sometimes I wouldn’t have time to get that cut-and-paste-style aesthetic, so I’d use Adobe Photoshop to replicate it (black strips of rectangle background with white text or vice versa). Instead of Hole, Lila Downs or Girl in a Coma may or may not have been playing in the background. No beers, but plenty of gin and tonics. Sitting in my painfully neat apartment (Virgo) I’d type up my story in a Word document. Then I’d email my friends (not Virgos) several times to send me their stories too. We’d collectively find our favourite desktop screensavers, patterned images or favourite revolutionary figures to turn into our page backgrounds. 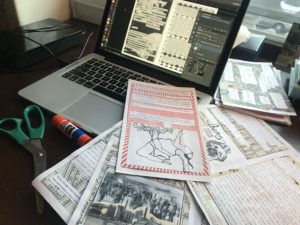 If we had time, we printed them out, along with our stories, and we’d get those glue sticks out as we chowed down on tacos de carne asada or elote en vaso (corn in a cup). I’d rescan everything, assemble the pages on Photoshop (yes, I know I could use InDesign; no, I do not like it) by creating pages 1,21 and 2,20 and 3,19, etc., utilizing those odd aqua blue Photoshop rulers. Finally, I’d turn the pages into PDFs, turn the PDFs into one, big PDF, and voila, a printed zine is made! Pro-tip: Make friends with a student or worker at a university. Printing zines is not cheap. We saved so much money.

AT THE END of every zine I make, I dedicate it to the memory of someone. I think this is because my first zine was created after the sudden death of a dear friend in 2012. Before he passed, I was only sort of working on the zine, lazily writing or putting it off, even though it was something I really wanted to do. It was called F words, and featured personal narratives on forgiveness, focusing, failure, and favourite things. I thought I had all the time in the world to make it. When he died, it was the first time I lost someone close to my age. It was incredibly sudden, and incredibly jarring. I realized that we actually don’t know if we have all the time in the world to make anything. Life is fleeting.

I swiftly finished my first zine, tabling it at my first zine fest (Chicago Zine Fest!) and dedicated it to him, creating some permanence in his sorely-missed absence. Since then, I’ve dedicated every zine I’ve created or compiled to a person that is no longer physically in this world. bp

Monica Trinidad is a queer, Latinx artist and organizer born and raised on the southeast side of Chicago. She is the co-founder of Brown and Proud Press (2012) and For the People Artists Collective (2015). You can see more of Monica’s most recent works at monicatrinidad.com.