“It’s easier to program and create things when you don’t have to worry about what someone thinks about what you’re doing in their space,” says Karen Carter of BAND. Whether they’re facing off with racist landlords, a hostile arts world, or the indie music scene, these four groups of Black artists and artists of colour are carving out spaces, and making headlines doing it.

In 2009, Toronto-based cultural worker Karen Carter, along with Maxine Bailey, Karen Tyrell and Julie Crooks, founded an organization that would create opportunities for Black artists called Black Artists’ Network in Dialogue (BAND). Starting out with pop-up events, BAND eventually partnered with TD Bank for Black History Month leading them to create a formal organization with staff and dedicated space.

“Black people in Canada have contributed significantly to the culture in this country,” observes Carter, “Part of BAND’s mandate is to raise awareness of those contributions through programming.” Despite these contributions, and the fact that “we live in a society and a city that purports to be one of the most diverse in the world,” says Carter, the city doesn’t create space for those diverse voices to be present. BAND has encountered numerous difficulties securing space amidst Toronto’s racist real estate climate.

“Black people in Canada have contributed significantly to the culture in this country. Part of BAND’s mandate is to raise awareness of those contributions through programming.”

When BAND was being forced to relocate from its previous location, it had trouble securing space due to “landlords not wanting to have Black artists in their space,” explains Carter. They decided to seek help from a bank to purchase a $800,000 space in Parkdale, a part of Toronto where poor, disabled, and newcomer residents are being rapidly displaced. BAND’s new home opened in April.

“As a Black cultural organization,” says Carter, “we wanted space to program…with the cultural voice we wanted to do it with.” He adds, “It’s easier to program and crea1te things when you don’t have to worry about what someone thinks about what you’re doing in their space.”

For BAND, that space, and its voice, is to show that Black people “are not monolithic. We are diverse people, we come from all over the world, have diverse perspectives, diverse positions, and our artists are as diverse as the regions… we come from.” Their current show, Ears, Eyes, Voice: Black Canadian Photojournalists 1970s–1990s is part of the Scotiabank Contact Festival and runs until August 13. The show demonstrates the breadth of that spectrum including images of Hollywood talent coming to town to pageants, protests, and people on the streets of Toronto.

When North Philadelphia’s Norman Blumberg high-rise apartments were demolished in 2016, Rasheedah Phillips saw the need and opportunity to secure space for the Black communities that had long called the neighbourhood home. In 2011, Phillips started the Afrofuturist Affair. The project seeks to make the concept of Afrofuturism — a movement composed of images of alternate futures for Black and Afro-diasporic peoples — accessible to low-income individuals. After being awarded a fellowship from A Blade of Grass, Phillips and artistic collaborator Camea Ayewa opened the Community Futures Lab in North Philly, which looks at space holistically and intersectionally, and “stretches… the meaning of art” says Phillips, “so that it’s part of the everyday community.”

Programs include workshops such as “Housing Futures,” which combined presentations about housing rights with artmaking, and oral history interviews where residents shared memories of the neighbourhood, including that Malcolm X stayed there for six months, and that it was once the location of John Coltrane’s house. The Lab also has also created a community gallery, in which community members contribute artwork and stories and has created “the opportunity for people to challenge the narrative of what Blackness is and what Blackness wants…especially for low-income people… and privilege their own memories of their own spaces and their own communities,” says Phillips. Thus, rather than perpetuating the idea that low-income members of the community don’t belong in the midst of redevelopment, the Lab uncovers their contributions to the community’s history as well as to its future.

The Black Artists Union (BAU)  started in December 2016 as a social support group to talk about how Black artists exist in the world and share common struggles. Nathan Olufan, who originally got the group together, observed a pattern all over the country that young Black artists, despite their talent “are overlooked many times in the art world because they don’t have certain knowledge, like how to do legal things… and put their names out in the media,” according to BAU co-founder and visual artist Oreka James.

Consisting of visual artists, a textile artist and a sculptor, five of whom operate out of The White House Studio in Kensington, BAU has bloomed into a collective of 14 core members. The goal is to “hold skills-sharing workshops for us by us,” says James, “to really be able to give resources to other Black creatives, because we know how the system works: it’s really hard to navigate… and find people who want to reach out and help you move and grow financially.”

The process has been one of self-discovery, with BAU producing the show Those Who Dance during February. After its success, they decided to produce a three-month show in July 2018 to “let go of the idea that Black History Month is just in February” as it isn’t enough time to talk about Black history.

“Let go of the idea that Black History Month is just in February.”

BAU is doing outreach into the wider community through upcoming events such as monthly film screenings throughout the summer and has applied for funding as it hopes to keep expanding and eventually secure space, either in the West end or in Scarborough. “We’d like to own a space to remind the neighbourhoods that we are here” says James. The spaces being lost to gentrification are “part of our culture, and these spaces can’t just be erased.”

Of course, money is an issue both as individual artists and as a collective, however, this doesn’t stop James or BAU. “We can create our own spaces… instead of having the world give us spaces in art,” states James. The art world is “not touching on things that we need most” and “we know what we need most.” For James, BAU “wants the rest of the community to know that we can do it by ourselves… if we just have the resources much is possible.”

Elsa Mirzaei felt uncomfortable going to indie rock shows in Ottawa as a brown-skinned woman, so she began going with her friends. Naturally, as people of colour in spaces composed mainly of white men, they experienced plenty of microaggressions. Looking for strategies to address the lack of diversity and representation of queer folks and women of colour in the Ottawa indie music scene, Mirazei and others formed a collective called Babely Shades.

Now the group writes blogs and articles about issues they face as queer and trans folks and people of colour, and host monthly events such as Space Jam. One of the collective’s key missions is to create safe spaces, and warn members about abusers and community spaces that are not queer- or POC-friendly. Babely Shades members take an activist approach to creating safe spaces by contacting venue owners in attempting to address their racism, ableism, or transphobia. Venues and their friends have not always been so receptive, and the group has unfortunately received death threats trying to achieve this kind of accountability. Nevertheless, Seiizmikk, a member of the collective, holds that challenging these spaces is important to Babely Shades because “a lot of times people are doing things out of internalized racism that they don’t even realize they’re doing… and it’s important to bring it to light.” Babely Shades partners with organizations such as Project Soundcheck, who try to “make sure that there’s no sexual abuse or harassment happening in shows in Ottawa.” 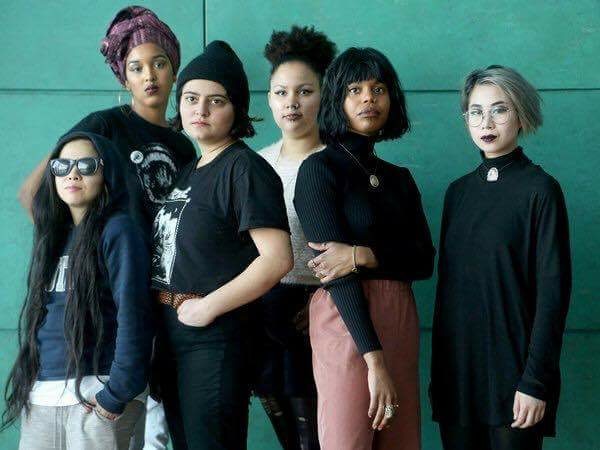 The idea of safe space in the music scene is not just limited to Ottawa. Babely Shades has grown to include offshoots in Montreal and Toronto, each expressing the mission of the collective in different ways. For instance, members of Babely Shades Toronto, such as promoter Nala Ismacil, put together a zine in January of this year titled “Black Punk” about Black artists and punk fans, inspired by zinester and punk artist Osa Atoe of Shotgun Seamstress zine. Babely Shades Toronto also recently held a zine making workshop led by Toronto artist Heidi Cho.

Babely Shades is necessary because “minorities are still struggling to have access to spaces and opportunities… within the city,” says Seiizmikk. The collective provides a much-needed platform for queer and trans people of colour to keep each other safe and forge their way forward in the indie music scene.