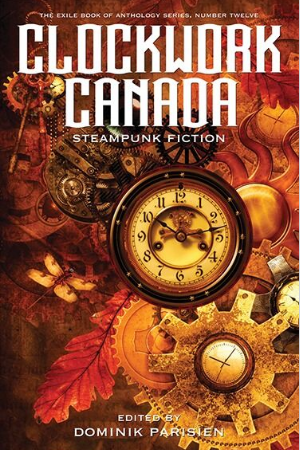 Dominik Parisien gives Canadian history a new burst of steam in this 15 story collection of short fiction. Throughout the collection, there is a unifying thread of mechanical innovation melded with the fantastical. The overall work employs a curious blend of historical and futuristic tones, with each individual story seeming to expose, turn over or re-imagine a different aspect of what we think we know about Canadian history.

From injecting indigenous Canadian history with fantasy in the form of monsters and magical life-maps in “La Clochemar,” to addressing issues of immigration and the hostilities potentially faced by foreigners in early Canada in “East Wind in Carrall Street” and “Komagata Maru,” Parisien has beautifully united 15 quite varied stories in a way that (for the most part) flows quite well. The themes touched on throughout the collection are indeed vast: in “Crew 255,” we see a post-apocalyptic Toronto through the eyes of an amputee with brass graspers for hands. “Buffalo Gals,” one of my personal favourites, is a mysterious dreamscape in which mystical yet mechanical beings roam the prairies.

The collection is saturated with Canadian wilderness imagery that we as Canadian readers cannot help but feel at home in, and employs themes of nationalism while also questioning what we think we know about Canadian history. In Clockwork Canada, Canadian history is reworked with fantasy and imagined mechanical invention, while also facing the reality of immigration and hostility in a country that now prides itself on freedom and multiculturalism.

Steampunk makes a refreshing return to the literary scene in Clockwork Canada, an intriguing and imaginative read. (Allie Vandersanden)