Book Review: For All the Men and Some of the Women I’ve Known 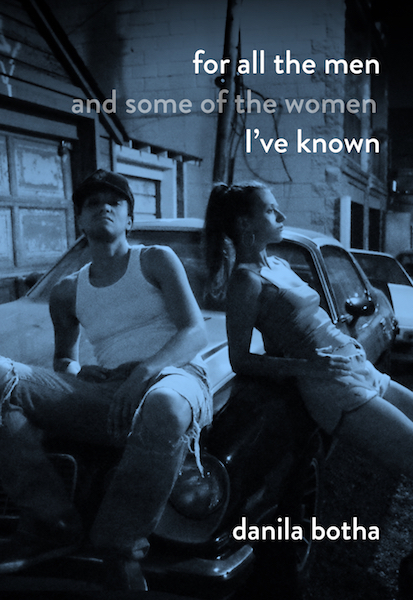 For All the Men and Some of the Women I’ve Known, Danila Botha, 152 pgs, Tightrope Books,

Most stories in this collection explore the fraught relationship between two urban stereotypes. The prose is unadorned with typical urbanite cultural artifacts galore. You could meet almost every character in this book by spending an afternoon in a downtown chain café, crossroads of the very normal ranging to the different-yet-instantly-recognizable.

That is, before each character becomes either a monster or a victim. Hopeful Character A tries to make a relationship or friendship work with B, but is suffering from one or more of depression and anxiety, drug addiction or alcoholism, an eating disorder, self-harm, obsession, masochism, overeating, or something within that spectrum. These problems don’t jibe with the rest of A’s personality, they’re just plopped on top like a condiment that overpowers all other flavours. B is the extreme-yet-banal antagonist. Botha’s antagonists are less than one-dimensional. (Can dimensionality be expressed in fractions?) The setup is invariably a description of why B is appealing to A. Then at some point, villainy condiment is dumped on B (after three or four stories I got fairly good at predicting in which paragraph this reveal would occur) and he or she become so insensitive I would have to lift the book higher so as to continue reading while rolling my eyes.

The trick Botha uses to obfuscate the over-simplicity of her antagonists is that they are impressive in general – lawyer/minor celeb (Ed), straight-A student (Sydney), etc. This creates a veneer of sophistication belying how morally binary Botha’s stories are, and how emotionally binary are her characters. Where the collection’s dust jacket refers to it as compassionate and fearless, I find it exploitative and presumptuous. Botha triggers morbid curiosity by pretending to have an insight into troubled people she does not possess – in other words ducking behind titillating dysfunction because she does not believe in her ability to write about (rather than “for”) the people she’s known. Supposing Botha has known many people like those in her stories? Heaven forbid, as in that case, she also defines real people merely by their chosen style and weaknesses. (Feliks Jezioranski)