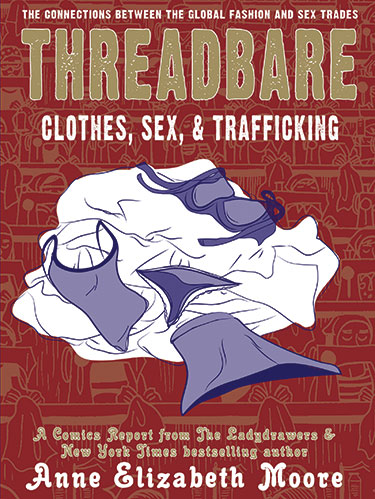 According to Threadbare, a work of comics journalism by the Ladydrawers and Anne Elizabeth Moore, an “82% male group of lawmakers set rules pertaining to the livelihoods of about 50 million women in the garment industry worldwide.”

Full of startling statistics, Threadbare contrasts localized garment trade with its current globalized version by exposing the human cost to the low price tags of popular retailers like H&M and Forever 21.

Told through geopolitical data and interviews from models, retail workers, and manufacturers, Threadbare builds toward a narrative connecting the garment industry to the sex trade. Most intriguing is its distrust of the anti-trafficking movement which it claims is less of a problem than we think because: “[t]he more […] trafficking language is used, the more of a serious problem it sounds like, the more funding is going to be available.”

I could use a more intersectional approach, as the book sometimes felt like white women were speaking about women in racialized countries to other white women; a tone which neglects to address the topic of race head-on.

Though some of the book’s expositional text is a touch illegible, the comics are beautifully drawn and the rendering of the interviews makes it seem as though you are sitting in the room with Moore and her interview subjects, sharing in their stories. (Fiona Raye Clarke)