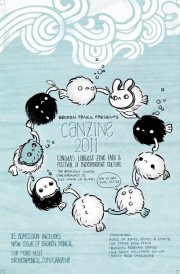 We’ve bludgeoned you with countless Canzine profiles and updates, but today it’s all worth it! Canzine is today! There are radical readings, book pitch and zine competitions , panels, art installations, a food market and, oh yeah, like a million zines that you will not find anywhere else! If you’re anywhere in or around Toronto, swing by 918 Bathurst Centre (just above Bloor) from 1 to 7pm today and check the indie culture extravaganza!

Please note: The Great Hollywood Zine Piracy Challenge is at 4pm to 5pm. Apologies if you were mislead by the regrettable Facebook Event Page.

2pm – 1-2 Punch Book Pitch
Live on our mainstage in front of a crowing crowd, you get two minutes to pitch your book to our panel of judges. They get one minute each to tell you why you’ll never get published in a million, billion years, or why they want to see your manuscript in their inbox ASAP.

This year’s judges are…

Evan Munday is the  publicist for Toronto-based publisher Coach House Books and an illustrator whose work has appeared in books and magazines, including the novel Stripmalling, by Jon Paul Fiorentino. Evan has written and illustrated a young adult book The Dead Kid Detective Agency, which will be published this fall by ECW Press.

Fiona Smyth is a Toronto based painter, illustrator, and cartoonist.  She is currently producing two art projects funded by the TAC and the OAC, and teaches illustration and comics at OCADU. Fiona’s first graphic novel “The Never Weres” was published by Annick Press in 2011.  A collection of her Exclaim comics “Cheez 100” was published by Pedlar Press in 2001. Fiona edits the drawing and comics zine The Wilding.

Amy Logan Holmes is the Executive Director of Open Book: Toronto & Open Book: Ontario, an organization that works to connect readers with Ontario authors, books and literary events. Read all about it at www.openbooktoronto.com and www.openbookontario.com.

rghosty (skot deeming) will give an overview of the practice of VJing. From analog to digital techniques, including foundation elements of the practice including clip building, visual rhythm, layering and live mixing to a variety of musical genres. In addition, he’ll also talk about how to get started, working with bands, DJs, promoters, getting your work seen and more.

4pm – The Great Hollywood Rip-Off Piracy Zine Challenge
Three challengers face off in a race to complete the zine-version of a famous film. Will our competitors make a chapbook version of Gone With the Wind or a comic of The Empire Strikes Back or a perzine based on The Goonies? Come watch and you’ll see…

Three challengers face off in a race to complete their version of a famous film. Will our competitors make a chapbook version of Gone With the Wind or a comic of The Empire Strikes Back or a perzine based on The Goonies? Come watch the grisly showdown!

ANDREA MANICA is a Toronto illustrator, in her final year at OCAD and creator of the print projects Summer Tears and Man vs. Food. Check her out at www.cerealwithasmile.blogspot.com

CHRIS LANDRY is the Toronto zinester and editor behind the punk-rock zine Kissoff and the perzine Striking Distance. He’s been making zines since the late 90s and his writing has appeared in Broken Pencil, D I Y or Don’t We?, Microcosm Publishing’s Zine Yearbook 9, and Get Fit for the Pit. You can also find him helping out at the Toronto Zine Library.

LEOPOLD McGINNIS is a Toronto poet and author of three independent books of fiction and two small press books of poetry. He is also the director and founder of RedFez. net which has been publishing other prolific but unknown writers since the dawn of the Internet. For more info, check out http://www.redfez.net/leopoldmcginnis

ANNNNNND Hosted by NAOMI SKWARNA, a Toronto-based writer and “entertainer.” She has been published in NOW Magazine, The Rumpus, and The Walrus, and as a hostess, is responsible for pelting the guests of Enoteca Sociale with bon mots. Naomi has co-edited a book of contemporary dramatic monologues to be published by ECW Press in Spring 2012.

5pm – Mental Health Zine Panel
Mental Health zine creators gather to discuss the benefits and challenges of sharing their mental health issues through writing. The panelists will talk about the stigma around mental health and how to challenge it through zine making.

Dave Cave is a zine write and retired blogger living in Cambray, Ontario.  He writes about mental health, rehabilitation, food, celibacy, television, suicide, fitness and procrastination.  He still lives with his parents and recently stopped caring about it. Dave Cave is the creator of the mental health perzine Everybody Moon Jump

Alex Jansen owns and operates Pop Sandbox, an award-winning multimedia production and publishing company with a central focus on graphic novel, film and interactive projects. He is creative producer and publisher of The Next Day.

Lindsay Gibb is the editor of Broken Pencil. She wrote the mental health zines article “Mad Pride” for the current issue of Broken Pencil and is currently in school getting her Masters of Information to be a librarian.

6pm – Radical Reading Series
Every year we present the best and brightest of the independent press at Canzine’s readical reading series. This year’s series features:

Danila Botha
Danila Botha originally hails from Johannesburg, South Africa, and currently lives in Halifax. Her first book, a collection of short stories entitled Got No Secrets was released by Tightrope Books last spring. She’s completed her second work, Too Much on the Inside (Tightrope Books), set for release this September and has just rounded up a third, a collection of short stories with some poetry.

Ethan Rilly
Ethan Rilly is the award-winning cartoonist behind the comic book series Pope Hats, which is published by AdHouse Books. He alternates between residing in Toronto and Montreal, as a result of very complicated quantum mechanics.

JONAH CAMPBELL is the blogger behind Still Crapulent After All These Years and the author of Food & Trembling (Invisible Press), a gonzo take on food writing. Just don’t call him a “foodie.”

Ian Hanna presents the Typewriter Orchestra room. Featuring emerging poets and musicians, the room will be half poetry, half music as 12 typists write poetry and then create music through the sound of their typewriters. Chapbooks and DVDs will be for sale in this room.