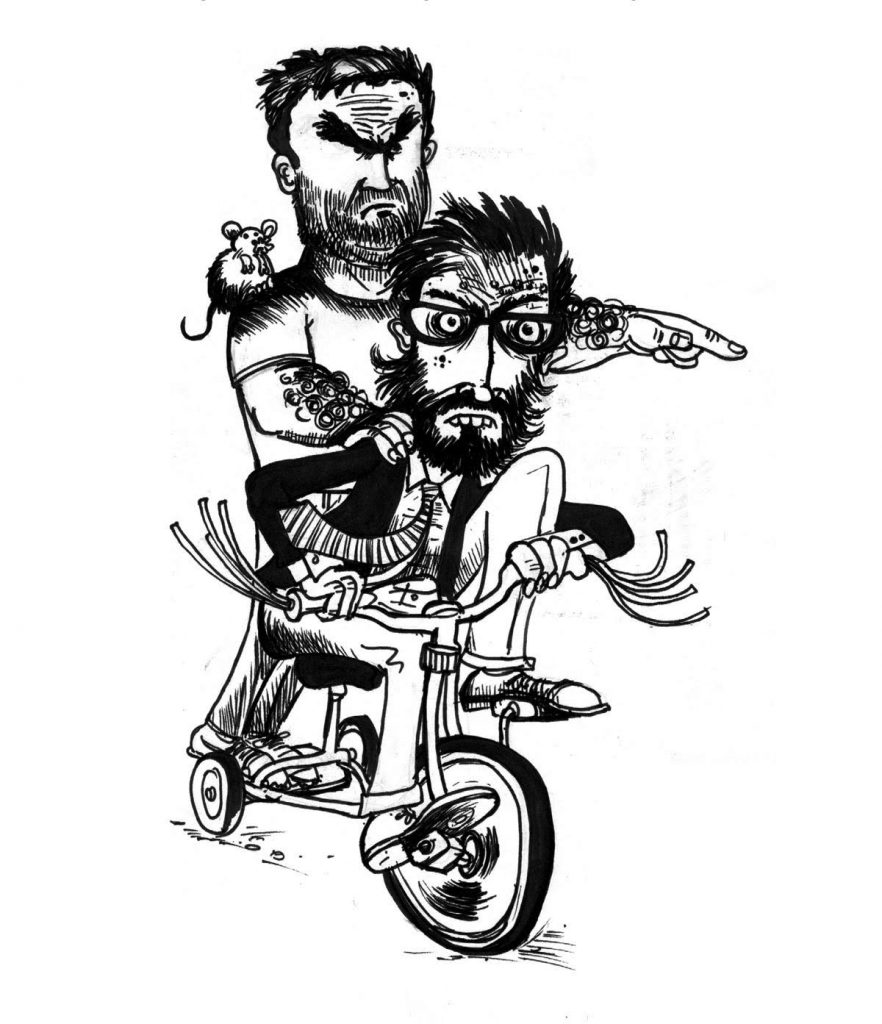 The one-man publishing machine known as Conundrum Press started the way a lot of good things do: from the leftovers of zines. In 1996, founder Andy Brown was living in Montreal after an unfinished degree from Queen’s University, a series of tree-planting gigs, and a stint of world travel. He’d just completed his MFA in Creative Writing at Concordia University. Surrounded by friends with notebooks and sketchbooks teeming with unpublished work, Brown began publishing their zines. “You figured, ‘Let’s put a photocopied zine. You can draw and write – why don’t you take your sketchbook and we’ll put it together?” Brown says.

“The very first publication I did was Everything I Know About Love I Learned From Taxidermy by Catherine Kidd. Everyone was like, ‘We want more, we want more!’” Brown says. Through manually producing that first book, he realized that he had extra offcut paper. “So I thought, ‘Why don’t I just print another book on the offcuts?'” And that’s how Conundrum Press was born – from the literal residue of Brown’s friends’ zines, chapbooks and eventually, comics. 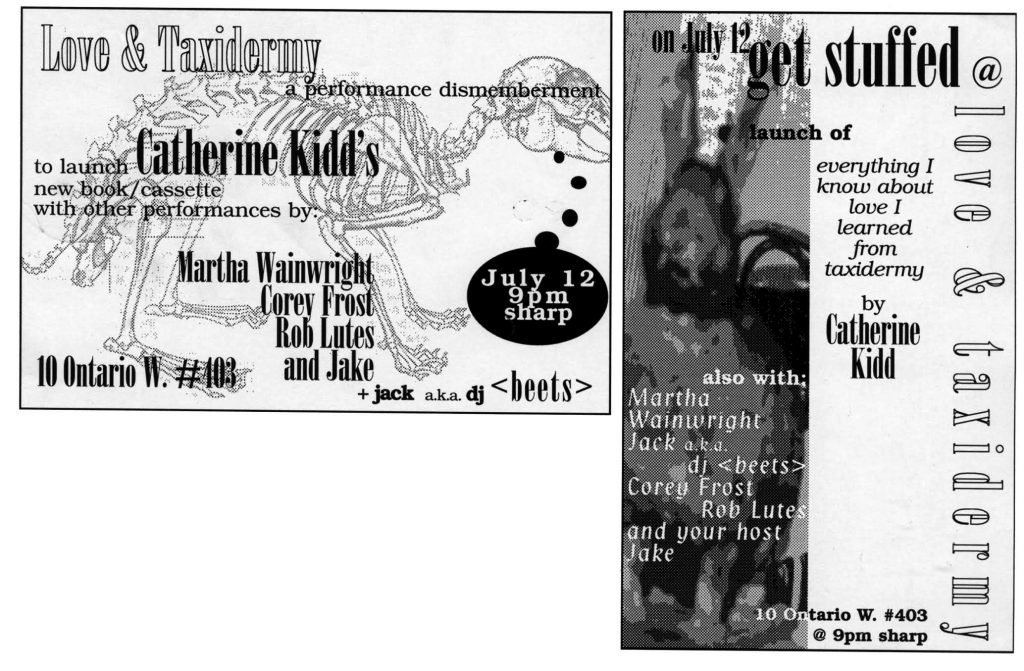 An ad for Catherine Kidd’s Conundrum chapbook Everything I Know About Love I Learned From Taxidermy, from 20 x 20.

The main thing to know about Conundrum Press is that, for two decades, it’s been fueled by DIY love. From Brown’s current home office in Wolfville, Nova Scotia, he single-handedly manages a small press publishing empire, putting out award-winning comics and graphic novels by established and emerging artists from across Canada. Conundrum Press has spent the last 20 years launching new talent, making beautiful books and passionately expanding the reach of grassroots creative expression.

This year, Conundrum has celebrated two decades in the biz with 20×20: Twenty Years of Conundrum Press, the lofty anniversary tome that covers the depth and breadth of the little house that could.  Travelling year by year, 20×20 features reprints, recollections and rarities from a who’s who of Conundrum’s increasingly visible stable of diverse writers and artists. The anniversary anthology joins Conundrum’s line of shiny perfect-bound [NB: the technical term is perfect bound] publications, while inside readers are invited to revisit the presses’ DIY roots.

Originally from Vancouver, Brown found himself in the centre of what he perceived as a cultural vacuum in mid-90’s Montreal. “At the time following the 1995 Quebec referendum, Anglophone culture really had no support system in Montreal,” recalls Brown, “At that time the Mile End neighbourhood was in transition, offering affordable artist accommodations. “Five of us were paying $600 a month for an eight and a half bedroom apartment.”

“When I published Catherine Kidd, we were roommates. She performed in this bathtub that she painted like a cow. It weighed a ton and had to be lifted up and down three flights of stairs. One day, we were halfway down the stairs for one show and I was like, ‘You can’t keep doing this, you have to lose this prop.’” says Brown.

“The walls were all painted different colours, which was common in our scene” says Brown,  “It was very run down. Other people would have these lofts. Godspeed You! Black Emperor had a place they just called 2Tango. They had parties and would practice. It was just like seeing a concert.”

Through this world, Andy was introduced to artists of all backgrounds from both French and English backgrounds. By his second publication Conundrum Press was officially born and adorned with the sinking man logo, borrowed from 1952’s Fun In The Water YMCA guide, illustrator uncredited. Brown published a wide array of titles: poetry chapbooks, alt-fiction, artist catalogues and slowly but surely, comics. “I was doing all this demanding work,” Brown says. “It was a lot of cutting, stapling, collating, and I said, ‘Jeez, this is taking up all my time. I should probably get a bit more serious and try to generate some income.'” By 2001, Conundrum began publishing four titles a year, the minimum required to receive government support and build a sustainable infrastructure. This regular schedule also marked the transition to more visual books, including a greater focus on graphic storytelling.

“I attribute it to the Canada Council,” says Brown, “I sat on a jury and learned one of the main things is having a very focused editorial mandate. I went back home and made the decision to focus on comics.”

Brown’s long-time friend and Conundrum comics artist Joe Ollman says there’s another reason for the focus: “He transitioned to comics out of a deep love and because it’s simpler to work with cartoonists. Often they provide a complete book in a less hands-on process,” he says.

A significant stop along the way was the 2004 release of Witness My Shame: a collection of drawings and sculptures by then-emerging visual artist Shary Boyle. The book sold out, prompting a second printing and the publication of a second title, 2008’s Otherworld Uprising. “Conundrum was an excellent support for someone at that stage of trying to figure out what they were doing,” says Boyle.

Representing the year 2004, Boyle’s contribution to 20×20 includes never-before published-drawings from the period. “(The book is) celebrating your origins, youth and the people that gave you some belief when you were an unknown person,” says Boyle. “The work I’ve included is very humble, but has great meaning for me.” 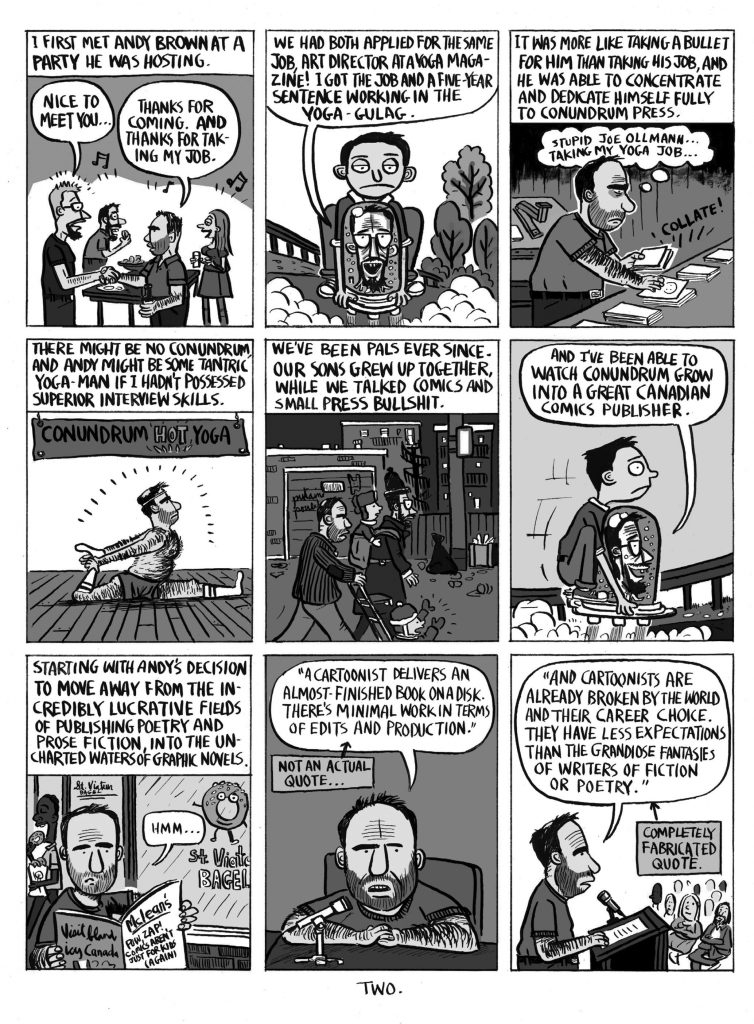 Joe Ollmann has been a staple of the southern Ontario zine scene since the ‘80s, and his relationship with Brown goes back to Conundrum’s early days. “I’ve known Andy since 2000,” says Ollmann, “The first time we met he was collating and stapling zines at a friend’s cottage and I helped him out. It was small press right from the beginning. We both had kids at the same time, unlike a lot of our friends. We were kind of oddities with babies. Our kids hung out and grew up together. We spent a lot of time together and became good friends.”

The relationship is revealed in 2014’s Milo & Sam. Written by Brown with Ollmann’s illustration, the tender comic recounts the hijinks of the pair raising their respective two-year old sons.

Family has shaped the course of Conundrum, though not always as expected. In 2011, Brown’s wife Meg Sircom died of cancer at the age of 43. They moved to Sicrom’s hometown of Wolfville for support during her illness, a permanent change that offers stability. Conundrum contributors pay tribute to Sircom in their own ways in the anthology: Dave Collier’s comic details how he met Brown and came to be published by Conundrum during the period of Sircom’s illness and passing, while poet Dana Bath provides her own contribution.

With the end of Conundrum’s Montreal years, the press’ transition to comics was complete—but not absolute. Artist and writer Sherwin Tjia is the author of nine books of poetry, comics and more. His output for Conundrum follows the evolution of the house, with his five releases including an illustrated collection of fiction, a graphic novel and his current Pick-a-Plot books (a Choose Your Own Adventure-styled series from the vantage point of a cat).

“Everything I do is weird,” says Tjia. “Conundrum lives up to its name. Andy actively culls the stuff that many other publishers overlook.” Tjia’s versatility matches the Conundrum approach. “Andy has an openness to taking chances. His accessibility is much wider than most other publishers. And as a smaller publisher he can take more risks and he’s more than willing to.”

Meags Fitzgerald published Photobooth: A Biography with Conundrum in 2014 and a follow-up, Long Red Hair, last year. She represents the emerging cartoonists Conundrum is fostering in this generation. Fitzgerald’s experience with Conundrum casts light on how the house nurtures up and coming authors through trust. “I had free artistic control,” says Fitzgerald.”I could ask questions about any aspect of the process but Andy didn’t try and influence me at all.”

“I came into this as as a creative person and because of that I treat the whole form as a means of expression—publishing as an art form. I like to think that I’m not that much different than the people I work with,” says Brown, “I’m a writer, they’re writers, so we’re kind of doing the same thing.”

Through its evolution from the streets of Montreal to international comics festivals, Conundrum has a one-man operation, built on Brown’s unwavering backbone. As the books themselves have become more beautiful and professional in presentation, the ethics and mindset behind Conundrum’s success has remained resolutely DIY and community-oriented. “The scale of the operation has grown but the workforce hasn’t,” says Ollmann. “Andy has a strong work ethic and cares about the books. You can’t get more DIY because he wears every hat.”

“That’s what Conundrum represents,” Boyle says. “A sense of community that never left behind its old friends. It has the sense of a small venture with integrity and heart.”

Talking to Brown, he has that wealth of stories (last-minute runs to the Canada Council courier, missing deadlines completely, frantic self-taught sessions of InDesign and Photoshop) akin to any DIY hustler in the small press scene. Sometimes you can hear the weight of these frantic struggles, the endless hustle in his voice. Other times he seems resolutely proud of his self-reliance.

“I had to learn accounting and I had to learn design,” he remembers. “I didn’t know how to do that — I never took a graphic design course in my life. I guess it was just a constant (process of) learning and pushing myself and I dunno. I’m approachable, I’m just being myself.”

It’s that dedication at all costs that has propelled Conundrum for the last twenty years. Brown has been described as temperamental, but regardless of his outwards demeanor he is wholly devoted to bringing DIY expression to a wider audience. “When you meet Andy, he seems very gruff,” says Tjia, “But over the years I’ve discovered, he has a heart of gold. He loves all this stuff.”