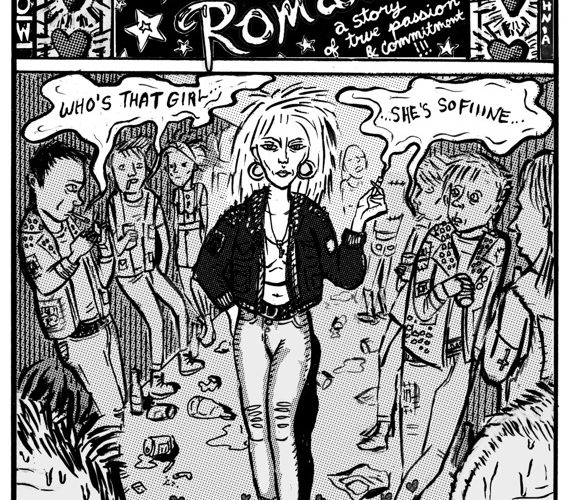 Fear of Punk//Fear of Art at Zine Dream 6

When New York’s Met Museum launched their exhibit Punk: From Chaos to Couture in May, a lot of people bristled – at the exhibit’s seemingly inauthentic fashion-based focus, and especially at the statements and outfits worn by A-list celebrities at the Met gala. Still, it’s one example of how punk and art are never quite as divergent as they seem, and it’s a subject that’s been analyzed and debated over since Vivienne Westwood co-opted the style and aesthetics of DIY British punkers for mainstream buyers back in the late ’70s.

Tara Bursey and Ben Needham are acutely aware of the complicated relationship between punk and art. Through the exhibition Fear of Punk//Fear of Art, set to launch in conjunction with Zine Dream 6 in Toronto next weekend, the pair of co-curators intend to show the exciting creative possibilities that emerge when punk and art coalesce. They’ve selected a wide range of artists who, in some way or another, embody a punk idealism and aesthetic in their work – whether through beautifully fucked-up paintings, poster art, fanzines or comics.

In an email, Bursey writes that she’s been making art for punk bands since she was 18. She says the West Coast punk scene sparked her initial interest and its influence remains with her to this day. “When I first became interested in punk when I was a teenager, art was an enormous part of what attracted me to the culture and the music– the music and the art were two important components of a single experience,” she says.

“When I was 14, I was really into early punk bands like Crass and Dead Kennedys, and bands from Los Angeles like X, the Flesh Eaters and the Gun Club.  These LA bands in particular had an aesthetic that I was immediately attracted to.  The art was menacing, smart and in a lot of cases really beautiful.  These early experiences with punk stayed with me, to the point where I can honestly say that punk is what influenced me to become an artist as an adult.” Both Bursey and Needham agree that there is sometimes a resistance to certain types of art in the punk scene, and this can ultimately be limiting.

“For something as individualistic as punk, people will often form a line-towing allegiance to a narrow view of what punk is,” Needham writes. “Art has always taken a backseat in the punk scene, despite the fact that artwork plays a huge part in how punk is understood by itself and the world.”

In Fear of Punk, Needham and Bursey will be showcasing work from artists all over the world, including NYC comics artist Leah Wishnia (she also edits the comics anthology Happiness Comics) Adam Kindred, a Halifax-based creator who publishes the punk fanzine Scrutiny and plays in Concrete Asylum, and Minnesota’s Dustin McChesney, who makes zines, plays in the band Total Trash and does all their accompanying artwork. A quick scan through the Tumblrs of these talented people confirms what Needham and Bursey are saying – that punk is a mindset that can bleed its way through multiple forms in a way that is palpable and yet also kind of intangible. Like the best art, it suffuses your body and mind with feeling, and sometimes it’s beyond description. “Fear of Punk is the type of exhibition I’d hoped someone else would put on for years,” Bursey says. “There is way more cross-pollination between punk and the worlds of zines and comics than there has been in the last decade– it’s exciting!”

“We think it’s worth acknowledging what’s being made in punk right now,” Needham says. “If punks could see the value of art and its real role in the world and acknowledge that they themselves are artists and part of society whether they like it or not (!), punk could be about understanding and a positive questioning of the status quo rather than a mirroring and spitting back the alienation they receive from the world around them.”

Fear of Punk//Fear of Art is taking place as part of Zine Dream 6 at Communication Art Gallery (209 Harbord Street) from August 2-4.