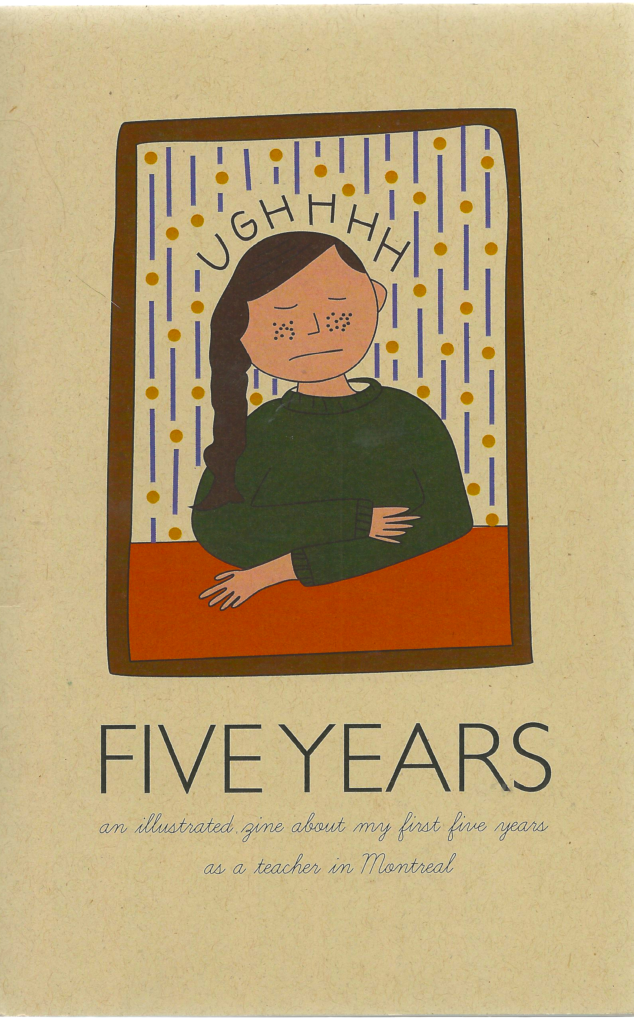 Conservative governments at all levels are deepening cuts to the education system in Canada and beyond. Thus it seems particularly relevant now to read about a new hire’s perspective on the challenges of working as a teacher. In a text-heavy zine that also features a few illustrations from her sketchbook, Claire Nicolson-Hurtig breaks down both the positive and negative aspects of her first five years on the job.

An added nod to the quite literal title of the zine, the author begins by explaining that 25% to 40% of new teachers leave the profession by or before the time they’ve worked their first five years. “Reasons for this are many — stress, high workload, lack of respect in the workplace, disorganized school systems, and exhaustion, amongst others,” she explains. Straight out of teacher’s college, Nicolson-Hurtig gets a job as an EAL teacher at an adult high school. I particularly liked her use of inclusive language here — instead of using the more common English as a Second Language (ESL) acronym, Nicolson-Hurtig uses EAL — English as an Additional Language — to not erase the fact that students might be fluent in multiple languages and have very different lived experiences.

Through short stories, the writer describes her subsequent teaching experiences and little-known aspects of the profession, such as the annual job lottery. Although I enjoyed Five Years, many questions remain after reading the epilogue, which is a bit of a cliffhanger! As an outsider to the education world, it is insightful to read about the challenges Nicolson-Hurtig faced as a young teacher. I can only hope she releases a follow up issue.