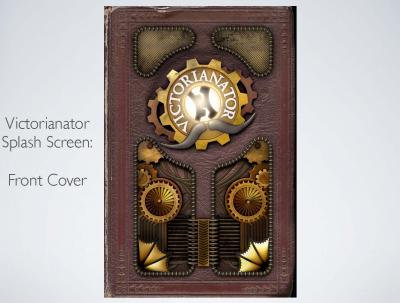 The world of iPhone apps is growing more limitless each day, and a Concordia professor has recently joined the fray with a delightfully inventive literary addition. Jason Camlot is chair of the university’s Department of English and along with a team of Concordia students, he has created the “Victorianator” – an app that instructs the user on Victorian-era elocution. Here’s how it works:  pick one of three famous Victorian-era poems – Lewis Carroll’s Jaberwocky, Alfred Lord Tennyson’s The Charge of the Light Brigade and Edgar Allen Poe’s The Raven – and recite it into your phone in monotone. A steampunky robot lurches to life and shows you how to gesture with the poem in the correct Victorian fashion via arm and hand gestures. If your gestures coincide with the game’s, it spits the monotone poem back at you, adding Victorian speech elocutionary effects to the recitation. Camlot says he wanted to explore modern-day tactile interactions with our mobile devices – the way we touch them and speak into them and work with the keypad – and weave in the Victorian style of gesticulation. You can download the app yourself or read more about it here.

Moving from smartphones to video games, a particularly spooky indie offering is due out today. Home is the creation of Benjamin Rivers, illustrator, designer, Ontario College of Art and Design instructor and Broken Pencil contributor. It’s a computer horror game where the protagonist awakens in a strange dark house after a storm and has to find his way “home.” Based on the trailer, the game has a creepy, twisting narrative, made more ominous by the fact that its pixelated design reminds me of the PC games I played as a kid, like Prince of Persia or King’s Quest. You can watch the trailer below and purchase Home for a paltry $2 here.

Do you like running, dear reader? Are you one of those people who lives in constant preparedness for a real-life Walking Dead scenario? Do you relish the idea of chasing after people and freaking them out? Run for Your Lives – the “Zombie 5K” – brings all of these interests together in one glorious spectacle. Runners make their way through a treacherous obstacle course and choose one of multiple routes to reach the finish line – all while dodging zombies, whose objective is to tear “health” flags from runners’ belts. Zombie volunteers receive a professional make-up job and the chance to act as “stumblers” or “chasers.” There is a Toronto race this year, and you can sign up as a runner, stumbler or chaser here. The race takes place at a yet-to-be-disclosed location on September 22, 2012.

Finally, animator Gavin Edwards has created a delightful little video as part of a Douglas Adams Literary competition run by the Literary Platform. It’s a history of the book set to an eerily prescient recording Adams made in 1993. You can watch it here.