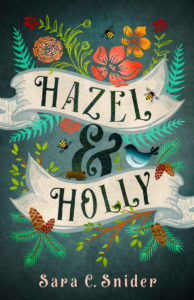 If alliteration was the game, Sara C. Snider would be the world champ.

Hazel & Holly follows the story of its namesakes — two witch sisters trying to locate their deadbeat father and release their mother from an eternal punishment. Teaming up with bachelor warlocks, Hemlock and Hawthorn, they travel beyond the enchanted forest and into the unknown realm of Sarnum.

Snider’s writing style is reminiscent of an old-school fairytale. The intriguing magical elements are enhanced by the overarching darkness of the story. Detailed imagery allows for the reader to walk through her captivating world: “She passed through a wrought iron gate set within a crumbling stone wall and came to a single-room cottage nearly overtaken with ivy and brambles of sweet briar.”

While her descriptions of the scenery are beautiful, I wish the same could be said for her character development. All four main characters seem flat, with fickle personalities. Even the few traits they could call their own seem to change with a flip of the page. This leads to unrealistic storylines that don’t make sense or aren’t easy to follow.

Hazel & Holly aims to be a grown-up version of a fantasy YA novel. In so many ways it succeeds, including being something you don’t need to read twice.