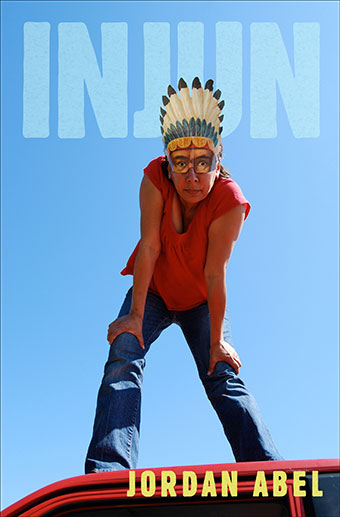 For Jordan Abel, winning Canada’s most lucrative literary prize isn’t just a personal triumph, but a win for “all the people who continue to fight against appropriation.”

The Nisga’a writer added to his accolades the $65,000 Griffin Poetry Prize for his third collection, Injun (Talonbooks), on June 8. The winning work is a long poem that weaves together pieces from 91 old pulp western novels — published between 1840 and 1950 — to explore racism, representations of indigenous peoples and mechanisms of colonialism, such as cultural appropriation.

“I think it’s absolutely an affirmation of voices that are in resistance,” Abel said on stage of his win, the Globe and Mail reported.

Back in 2010, Abel’s short story, Three Dudes, Some Drugs, and a Bear, was a runner-up in Broken Pencil’s Deathmatch writing competition. From its opening lines, the short story had a unmistakable Fear and Loathing vibe:

“By the time the acid took hold, we were halfway to Edmonton. Tommy rode shotgun, a cigarette dangling from his dry lips, and Bear scrunched in the back seat, shifting constantly. Johansson, our first year roommate, had called us on his cell a few hours ago, breathing heavily, saying that he needed to get out, that everything had gone wrong.”

“Deathmatch was a substantial influence on my writing,” he said in a 2012 interview, largely because of the “enormous amount of feedback—more feedback than I’ve ever received for anything” that he’d gotten through the process.

After the Deathmatch, the Vancouver writer went on to publish Un/inhabited (2015) and The Place of Scraps (2013), which was the winner of the Dorothy Livesay Poetry Prize and finalist for the Gerald Lampert Memorial Award. His work has since been anthologized in Best Canadian Poetry (Tightrope), The Land We Are: Artists and Writers Unsettle the Politics of Reconciliation (Arbiter Ring), and The New Concrete: Visual Poetry in the 21st Century (Hayword).

At 32 years old, it’s likely Abel has quite the creative career ahead of him, but in the meantime he’s pursuing a PhD at Simon Fraser University where he’s researching the intersection between Digital Humanities and Indigenous Literary Studies. (Anisa Rawhani)