Pencil Sharpener: Beyond the Duplex Planet 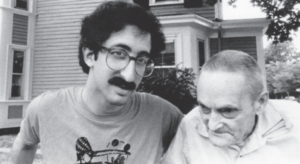 Way back in 1976, David Greenberger created The Duplex Planet, a zine inspired by conversations with seniors in the nursing home where he worked. It wasn’t long beforeThe Duplex Planet gained a cult-like following, with fans including cartoonist Lynda Barry and magicians Penn & Teller. Over the years, the project has grown and taken the form of recordings, books, and comics. Now, almost 45 years after its inception, filmmaker Beth Harrington is making a feature documentary about Greenberger’s zine and the journey that ensued.

“When [David] started interviewing seniors, he was in his mid-twenties. Now he’s in his mid-sixties, a senior himself,” Harrington reflects. “I find that to be an interesting trajectory worth exploring.”

Learn more and support the film on Kickstarter!