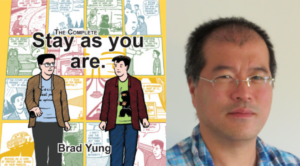 The Complete Stay as you are.

Yung’s Stay as you are. mini-zines might just be the ultimate Gen-X underground comic. Two guys in their 20s simply banter away that post-ironic tone that was cool when it came out in the late ‘90s. Collected at last, the zine is still despairingly hilarious, and when it doesn’t quite stand the test of time (musings on the internet, anyone?), grown-up Yung owns up to his misfires. Oh, let’s not forget occasional breaks for a homicidal bear! Far from an exercise in nostalgia, Stay as you are. is like putting on an old favourite album and finding that its subtle tunes and painfully true lyrics affect you in surprisingly new ways.

Brad Yung began drawing comics while at University. He had no artistic experience, but an itching desire to challenge himself and try something new. Years later, and there is little Yung hasn’t tried. From his debut collage-zine, Juxtsuppose, to a screenplay of Stay as you are. to his upcoming novel, Lessons I’m Going to Teach My Kids Too Late, Yung resists repetition and delights audiences with his relatable and original work.

The Complete Stay as you are. is part of our Summer 2019 Indie Book Picks.

Brad’s counterpart in Stay as you are. is almost always an unnamed roommate (who you remind readers is not based on a real-life person). Did you base any of their dialogue on conversations you had in real life?

All the time! I used conversations I had, conversations I wished I’d had, stuff I’d read in magazines or newspapers or saw on TV… I needed a brand new topic every week, I couldn’t afford to ignore any possible sources.

You seem to strive for interactivity in your work—hiding messages and images in your Non-Sequitur Theatre (NST) strips and mailing mix tapes of audio samples along with your Juxtsuppose zines. What motivated you to add these interactive components?

I’ve always asked myself, “What do I want to see? What’s different, what’s not being done?” As a creator, I create for myself first and foremost. I try not to consider the audience and guess what they’d like. But I’m also part of the audience and I like to be involved, I like hidden easter eggs, and I don’t like reading the same ideas over and over. Writing the same thing repeatedly, for me, is worse than that. And drawing two guys doing nothing but sitting and talking got tiresome real fast, so I had to find something else to do or go crazy. Juxtsuppose was my big splash debut and I loved crafting all the little inserts and extras, but it was just too much work. It was worth it, but I don’t think I could do that again.

Early on in your career, you worked on a short poetry-comic strip, Barrett Loves Browning. ‘Stay as you are’  itself came from a children’s poem. Looking back, is poetry something you wished you had included more in the Stay as you are. strips?

Poetry’s not a passion, I’m just good at writing rhymes. Throwing one in a strip once in a while mixed things up, kept me from getting bored, but I didn’t want to overdo it. One of my favourite strips is “Love the poems, hate the poet”—it still makes me giggle. I have several poet friends who could identify with it, I guess. One of them even silkscreened it on a T-shirt. I think there are 3 poems in Lessons I’m Going To Teach My Kids Too Late. Again, it helped to prevent having every chapter read the same way.

How did you find the experience of writing your first novel, Lessons I’m Going to Teach My Kids Too Late, compared to your experience making comics or zines?

Lessons was written in isolation. I didn’t have weekly feedback and the format was relatively untested, which was somewhat terrifying. Having such short chapters that were independent of each other was a bit like doing my comics in that I constantly needed new topics, I didn’t spend too long on each one, and there was a sense of accomplishment with visible results when I finished a chapter. Creatively, it was as satisfying to work on as I remember, and with less ink on my fingers!

Speaking of form, did you enjoy writing a screenplay version of Stay as you are.? What was the most challenging aspect of that experience?

I liked doing it because it was different. A different writing experience for me, and different from other movies. Giving my characters a little more background and a few friends was fun to explore, a bit like watching Kermit the Frog ride a bicycle for the first time. “Oh wow, he has feet!” But the constant demand for rewrites: “We like it, but we think it would work better if you could set the whole thing at a wedding rehearsal.” Holy crap.

You say that your Stay as you are. strips made you famous, and that you were originally uncomfortable with that attention. Have your feelings about being famous changed over recent years?

I still don’t think I’d like it. I was recently (last year, after the book was written) diagnosed as a high-functioning autistic, so maybe that has something to do with it. Do other people enjoy the attention? Is that normal? I don’t know normal but maybe, as a creator, that’s to my benefit.

You’ve covered a lot of ground, from zines to comics to screenplays to your first novel – are there any new projects on the horizon? (Perhaps a Ninja Bear cartoon mini-series?)

Everybody wants more Ninja Bear! Fun to draw but tricky to write because it had to work on more than one level. If Lessons does well, I’d like to write another book. I don’t have a solid concept yet, just a title, but that’s how Lessons started. I just hope it doesn’t take ten years to get around to it like last time…

Both The Complete Stay as you are. and Lessons I’m Going to Teach My Kids Too Late will be available in stores this July.