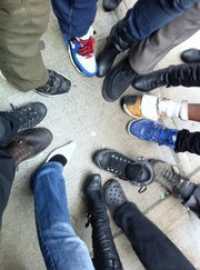 This Friday, July 1 at 7pm at the Gladstone Hotel, the Parkdale Street Writers Workshop launches Underground Inspirations, a beautiful zine featuring the workshop’s finest new pieces. The launch will take place on the second floor of the Gladstone, and will feature music, food, and readings throughout the night.

Parkdale Street Writers founder Emily Pohl-Weary is an award-winning author, and her multidimensional passion for writing fuelled equal successes in her editorial work (including a stint as co-editor of Broken Pencil!), and writing workshops for shelters, libraries and high schools. Her desire for a longer-form workshop and deep-rooted loyalty and concerns for her childhood neighbourhood sprouted Parkdale Street Writers, a program for Parkdale youth 16-25 to participate in intimate writing workshops with professional authors, improving their craft and working on resisting social pressures. I was lucky enough to secure an interview with Emily and catch her reflections on the genesis of Parkdale Street Writers, her Parkdale roots and the upcoming zine:

EPW: I founded the group in 2008, for youth 16-29, after a particularly dangerous six months in the neighbourhood. There was a slew of violence and mass arrests. One young man I’d known for several years was murdered by his childhood friend, and I was shocked to discover that some youth I’d known since they were kids couldn’t read their police reports. Although South Parkdale is not listed as a priority neighbourhood, the area is one of the few remaining downtown hubs for new immigrants and out-patients from the Centre for Addiction and Mental Health. Many youth become involved with the street because they’re dealing with institutional racism, social pressures and a lack of opportunities. I started thinking a lot about what helped me get through those years, which are difficult ones — you’re figuring out who you are and what’s important to you — and that was writing and reading.

BP: I’ve read that you conduct writing seminars at high schools – did the idea grow from your work there?

EPW: Yes it did. I’m frequently asked to lead workshops for schools, shelters and libraries. One or two sessions just isn’t enough time to develop the kind of relationship you need to really improve your writing.
The participants in my workshops drive the content. I couldn’t sustain this kind of work if it felt like I was boring people or forcing them to read/write stuff they’re not interested in. For the past year and a half, I’ve also facilitated a weekly writing group for First Nations men in transition, through Sagatay, a program run by Native Men’s Residence (Na-Me-Res) here in Toronto. I work part-time as an acquisitions editor for McGraw-Hill, on high school texts for struggling readers. All of it inspires me…

BP: It’s interesting that the program is specific to Parkdale – do you have roots in the neighbourhood? And through the workshops, have you noticed any writing aesthetics/sensibilities distinct to Parkdale emerge?

EPW: I grew up there. A librarian named Rita Cox worked at the Parkdale Library when I was a kid. She had a profound impact because she remembered all of us, knew what was going on in our lives and what we were reading. She actually gets partial credit for me being a writer, because she shared her love of reading and storytelling. I modeled the welcoming feeling of the group in part after her way of being. I think it’s important to make people, especially youth who are often feared or prejudged, feel appreciated and safe, in order for the work of writing and opening up to happen in a meaningful way.
My philosophies are essentially: no cost, no grades, no homework, no judgment, no guilt. All the workshops are taught by me or another professional writer or artist. This year, we brought in people like Lillian Allen, Jason Baerg, Tamara Faith Berger, Willow Dawson, David Delisca, Kristyn Dunnion, Nalo Hopkinson, Martin Mordecai, Robert Priest and Jean Yoon. The rules are to be respectful of others and remain quiet when other people read. Participants gradually learn to listen actively and give critical feedback. If people want extra writing help, I’m happy to give it outside workshop time or find a suitable mentor who’s available.

BP: Could you tell us about the upcoming zine?

EPW: I just saw a proof of the zine, which is called Underground Inspirations, and it’s AMAZING! The writing ranges from raw to beautiful, Parkdale-specific to universal, confessional to formal structure. We wanted to represent the lives of young people growing up in this city, and I think we’ve succeeded. I’m really proud of this publication, and hope the contributors are too!