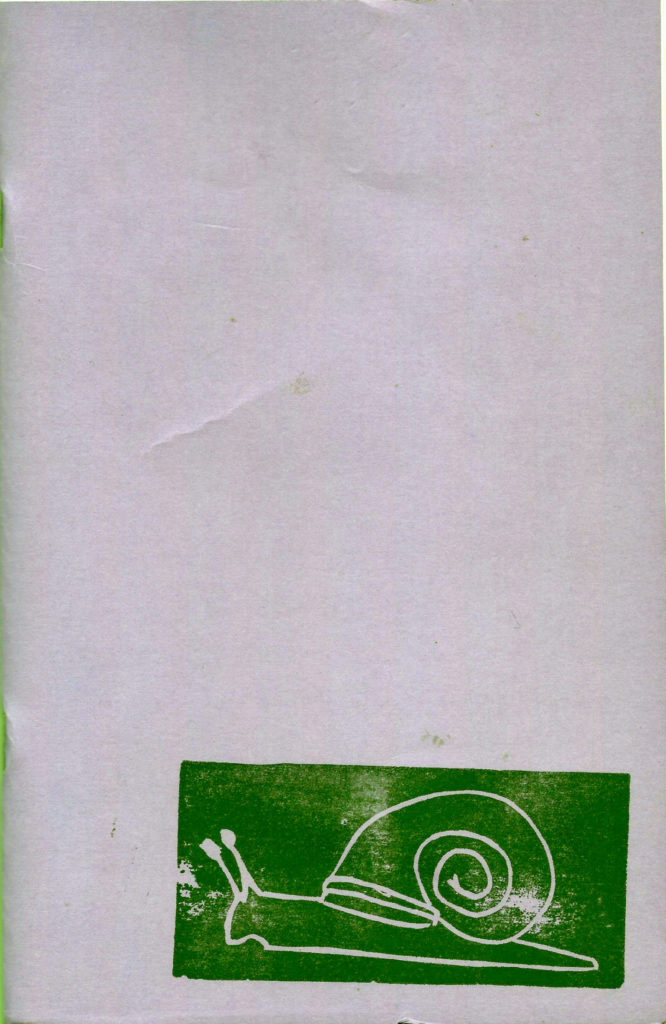 In the second issue of this skillfully written perzine, catalogued by colours rather than numbers, EA Douglas’ essays delve into the tricky intersections of creative yearning and mature self-awareness.

The “Purple issue” is named for the colour of its cover stock, decorated only with a block print of a snail in the front lower corner. The typography is equally plain: conventional word processor text. But the contents of these straightforward aesthetics, and where that content goes, is anything but simple. Douglas deftly writes introspection and memory into life, in all of its flaws. Like Nancy Mairs, whom Douglas quotes in her epigraph, Douglas’ essay work can feel like watching her take a long look in the mirror, but with an image made up of past and present: old questions, confusion, trauma, hope, vision and resolve coming together in the moment to show who Douglas is right now, and who she is becoming. The seven accompanying black-and-white collages hang together well with the essays. Each incorporates some level of self-portrait: with Douglas either front-and-centre, or maybe just the reflection of a leg in a mirror, or not there at all — save for a white silhouette.

These essays orbit around the tensions, motivations and inspirations behind her creative process as an artist and writer. Reflecting on a move from Toronto to Vancouver, and the circumstances that demanded it, Douglas shows how anxiety (framed as negotiating with her inner “creative taskmaster”) and an emerging, conflicted ambition to succeed in her creative work play against each other in the formation of her identity as an artist.

Survival through trauma and abuse shape the trains of thought that unfold throughout. Pivotal moments and streams of recollected consciousness bring the reader into the room and into her head, where she interrogates her own thoughts and reactions. In a meta kind of way, Douglas’ zine demonstrates an insight she shares midway through the text: that “exploring [her] lived experience [is] essentially [her] entire creative practice.” She’s extremely effective at it.