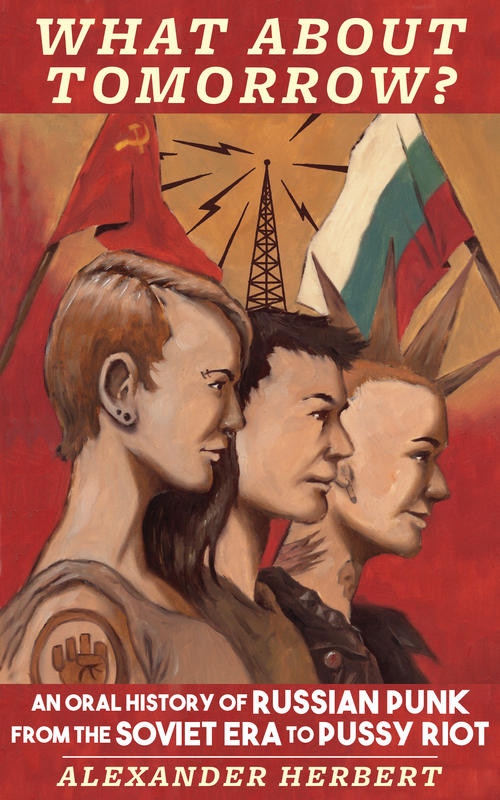 What About Tomorrow? An Oral History of Russian Punk from the Soviet Era to Pussy Riot

While many of our introductions to Russian punk probably started with Pussy Riot, there is a long history of energetic and anarchist punk scenes in Russia going back to the Soviet Union. What About Tomorrow? recounts how punks managed to birth vibrant subcultures under the oppressive eye of the KGB, where “If a person didn’t look like a normal Soviet person, if he was wearing short trousers, pointed shoes, a black tie, black glasses, he was always arrested.”

Its nonfiction account is almost as fast-paced as its subject matter, weaving a seamless narrative from transcribed interviews in a polyphonic scene history, bolstered by archival photos, character lists, and lyrics.

From punk’s rise in Leningrad in the USSR’s final years and extending out beyond its fall in St. Petersburg, Moscow, Siberia, and various provinces the book covers a lot of informational ground.

From self-recording with homemade instruments to apartment concerts and samizdat fanzines, What About Tomorrow? provides an engaging account of the lives of Russian punks through the ages. Its passionate characters recount being attacked, street fighting, being investigated, censored, conscripted, and even committed. The book sings in its account of the antifascist movement, which saw innocents and antifas dead or injured. It attempts to include female voices to show punk’s patriarchy, but since “Women musicians were just not liked by men,” the inclusion is inevitably insufficient for those looking for a fuller narrative of the scene.

When many are asking themselves if there will be a future, What About Tomorrow? tells a history of resistance in its own words that is both urgent and needed.