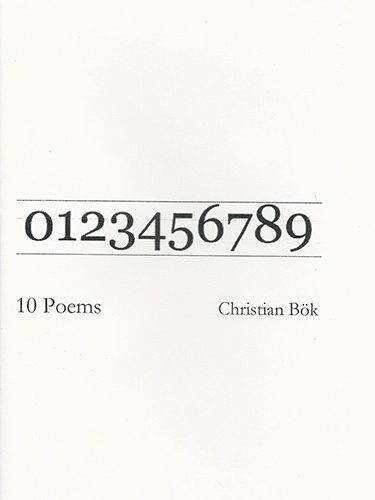 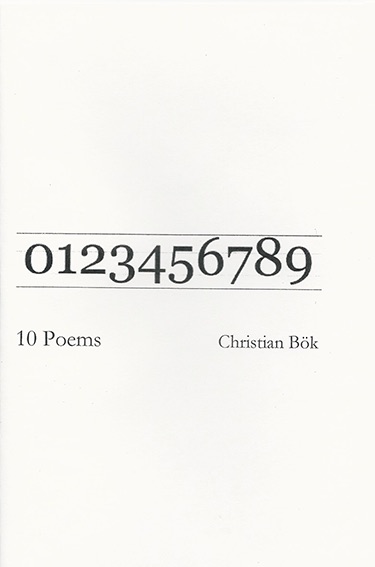 Christian Bök has become, since the popularity and critical success of his 2001 Eunoia, something of a (divisive) house-hold name in Canadian poetry. It is likely that anyone already familiar with his work has a strong opinion on it, and it is equally likely that 10 Poems will further entrench that opinion, whether it be positive or negative. I happen to really enjoy Eunoia, Bök, and — no surprise — 10 Poems.

These poems extend Bök’s method of linguistic play into a few new interesting corners. In “The Doomsday Song,” he for-mats comic-book style onomatopoeia (think “KROOM! KROOM! KRAKOOM! / KRAKA-DOOM! KA-DOOM!”) into a kind of table of contents, bridging the gap between his deconstruction of English and his tension between language-heard and language-read. In his “Phonological Key”, printed as a poem in itself, he deliberately guides the reader through missteps, so that the pronunciation of subsequent poems is always off-kilter. If “u = ‘oo’ as in lute” for instance, then the “blubbering / rubber gut” in the following poem must be pronounced “bloobering roober goot.”

Bök’s work here then is as opaque as you ask it to be. He places pointed stress on the English language in an effort to decentre it, and the result is a series of poems that are as familiar as they are foreign. I have encountered many who find this frustrating, but just as many who appreciate the game being played. I find myself in the latter category, and recommend above/ground press’s print-ing of Bök just as heartily as I would Coach House’s or Northwestern University’s. (Joel W. Vaughan)