Facts About the Weather…and why my whore wife left me 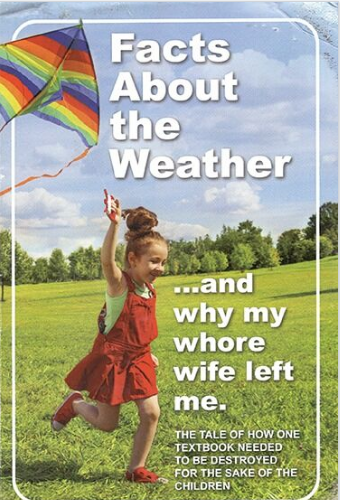 Normally, we wouldn’t review a zine that oozes misogynistic hatred out of every page. But after considerable debate in the office, we decided to go ahead and write it up. So here goes:

First off, Steve’s full colour photocopied zine purports to be an extremely offensive chapter from a grade school science text book entitled Science For You and Me. According to the introduction and elaborate afterword, it was rediscovered by Steve and brought out into the world because… well, Steve’s intro doesn’t explain why something so horrible that it had to be “burned immediately, forcing thousands of school districts to pay their janitorial staff overtime” is now this short zine. At any rate, the backstory suggests that the whole chapter was slipped into the textbook by an editor whose “wife was divorcing him”. Consumed by “heartbroken rage” the editor produced this “expletive filled rant intermixed with actual information about the weather.”

What follows are 20 or so pages of a faux textbook featuring, for instance, a picture of a thermometer and accompanying text: ”Do you know what the thermometer says the temperature of my ex- wife’s icy heart is?” Turn the page and see the activity – “How do you tell if your mom is performing illicit oral sex on a strange man’s sweaty penis?” – followed by instructions for making your own pair of toilet paper roll binoculars. Get the idea? It’s page after page ending with the same punchline. The zine is very well put together and in some places it actually produces a shock-value guffaw or two. Despite that, it’s a horrible object.

Even if we give Steve the benefit of the doubt and say that this whole project is just a really really misguided satire, we still are left wondering just what he was trying to achieve. A satire of old style textbooks? In theory, maybe. A send-up of misguided male rage? It reads more like a how-to. Instead, whatever Steve’s intentions, this thing comes off as a noxious, self-indulgent tirade. So why review it? Because maybe, just maybe, Steve will read this. He will then know that the zine he so lovingly crafted reveals something very ugly about its maker. Steve, it’s time to move on. Recall the zine and return it to the “pile of ashes and cinders” where you supposedly found it. You can be better than this. (Hal Niedzviecki)