In anticipation of the launching of the 2018 Broken Pencil Zine Awards, we will be presenting you with a look back at the 2017 winners. And now the winner in the Best Litzine category!

Spellbook for an Attic Gardener

“I’d like to liken myself to lichen / as grows on the roof, gets nibbled by the pigeons, / that’s easy going growing for you, / indifferent and persistent, / though the bits chip away, / but I’m not rooting in the shingles, / I’m nesting with the strays.”

Such delicate, achingly descriptive moments of bliss fill Spellbook for an Attic Gardener page after page. The series of spells, written in an attic apartment by Laura Watson, complete with handsome illustrations, take various forms: prose-poems, gently metered rhymes, lyrical flirtations, numbered lists. They are portraits, vignettes, memories, invocations. It is a heart-wrenchingly beautiful zine we were delighted to reward with a trophy for Best Lit Zine. 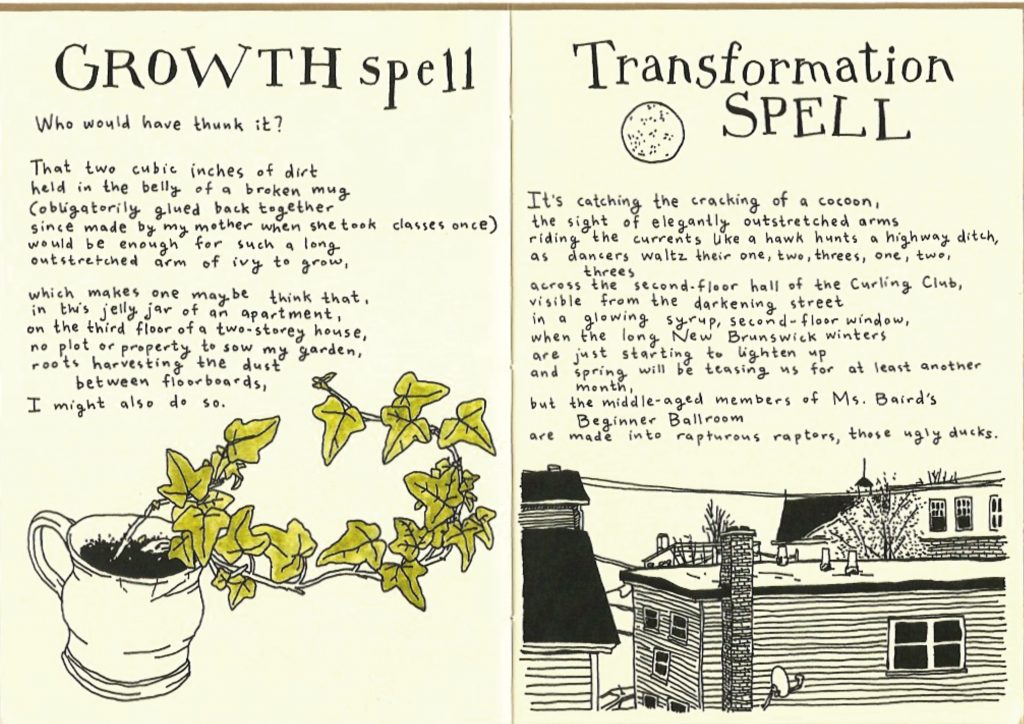 “I think I made it partly to reconcile myself to the transience and instability of living conditions for most young people today. It’s hard for us to feel rooted in a traditional way. It’s hard for us to succeed using traditional models. So we have to sort of carve out a new approach for ourselves — new ways to feel connected, new concepts of spirituality, new survival strategies,” says Watson. “That might be why a zine felt like the right format for these poems. In zine-making, we have total autonomy and the relationship with readers and other makers is intimate.”

A zinester of five years, Watson can be found selling her zines at zine fairs and online, but also operates a postal exchange subscription project to connect zinesters the world around. Perhaps it’s no surprise that she’s interested in creating new ways of connecting and grounding ourselves.

Is That So? Issue 4 // By Catherine Sinow (San Diego, California)

Meatheads, Or How To DIY Without Getting Killed // By Noah Wareness (Toronto, Ontario)