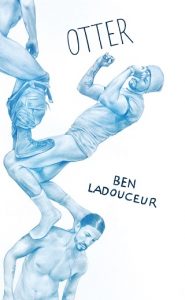 If you didn’t know, gay men often use the names of woodland creatures (bears, cubs, etc) to describe men’s relative body hair and shape, ‘cause why not? For the uninitiated: an otter is a leaner, younger guy with a furry face or body. And prob­ably relatively hip, to boot.

But although “otter” is contemporary lingo, Ben Ladouceur’s thusly-titled col­lection isn’t so concerned with inhabit­ing the present. More often, it revives and reviews a particular gay history. Figures like Vaslav Nijinsky, Oscar Wil­de, Wilfred Owen and all of their re­spective lovers are deployed as a means of unpacking the poet’s own environ­ments, sex life, and general sense of doubt.

Yes, a backwards nostalgia for his liter­ary inheritance pulses through Ladou­ceur’s collection, and his language is decidedly aristocratic: “our bodies shall devise unpunctuated treaties,” he imag­ines a beautiful, vacant woman whisper­ing in “Fête”. “How I refused to don the clothes the maid ironed,” says the voice of another poem, set in 1922.

Otter is formally impressive, with clever cadences, playful, sometimes ob­scure word choices, and tightly coded confessional vignettes — which is per­haps why it feels so stuffy. Ladouceur loosens up and settles into the collec­tion’s title in the third and final section, “Dead Dreams of Monochrome Men,” named after a 1990 dance piece by Lloyd Newson. This last batch is verbally spars­er, more modern. His bourgeois aesthet­ic revamps somewhat for today, decorated with things like assless briefs, penile cysts, Band-Aids and corduroys. Ottawa and Toronto’s streets, malls, and gay bars pro­vide the backdrop for a less guarded inti­macy that simultaneously plays out in emails and “that photograph everyone liked”.

Ladouceur is smart with words, per­haps consumed by them, and sometimes it feels like he’s try­ing too hard. But then again, that’s what we so often ask of poets. And at his best, his delicate wordplay becomes a sieve clarifying his insights rather than mask­ing them. (Jonathan Valelly)