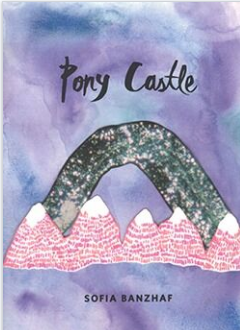 Winner of Metatron’s ‘Prize for Rising Authors of Contemporary Literature’, Banzhaf’s first book is a short but fairly detailed portrait of a casual descent into opiate dependency. Pony Castle places its reader behind the eyes of a nihilistic twenty-something who stumbles into pill- popping in a blameless kind of nihilism, only to find herself stranded when ‘care-free’ is no longer an available option.

Pony Castle describes itself as a book, though this term might be debated. Totalling 44 small pages, the glue-bound text is something more meaty than a saddle-stitched zine, though much less substantial than the average novella. It is composed, instead, of a many fractured bits of flash fiction, divided into chapters which function as quick-cut film scenes to chisel out a narrative arc. The result, here, can be attributed to Banzhaf’s style, never quite poetry, and yet always dancing along those lines. She plays this game to great success, fishing out passages like “Mozart died from eating pork chops. The world is dangerous and my mother once told me that happiness comes from the heart, not the places you go and I say good because I’m not leaving my room and I will draw circles in this notebook until my wrists break.” This rambling fits well with her narrator, and Banzhaf is deserving of her early accolades.

This little book is a quick read, but worth picking up for the risks it takes and the dedication which obviously went into its professional final product. Anything but a cautionary tale, Pony Castle is an interesting take on the subject matter, choosing to describe “the way life snaked through” its narrator, and thus feels decidedly honest. (Joel W. Vaughan)