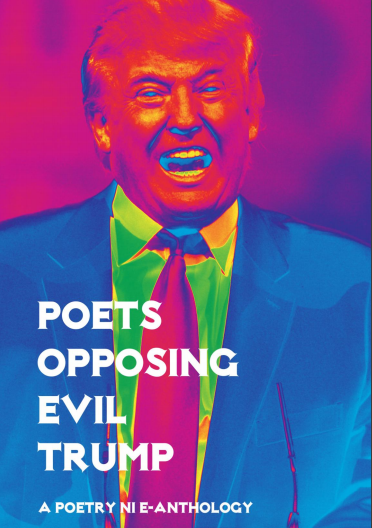 In the increasingly cacophonous din of this post-Trump election week, I’ve heard some people console themselves (online or in person) that at least this presidential run will inspire some really good and angry art. While I appreciate the need to desperately seek a silver lining, I’d also echo Jessica Hopper’s view that a hell of a lot of smart and raging anti-oppressive art also existed well before Trump was elected. Case in point: the poetry e-anthology Poets Opposing Evil Trump, which originally dropped this past June and is available for free online. Compiled and edited by Colin Dardis and Geraldine O’Kane, the anthology collects works by poets all over the U.S. and UK that unpack various unwholesome aspects of the orange-hued president-elect. Of particular note: “Zoo Allegory” by Jonathan May likens Trump to a befuddled, shit-flinging and masturbating monkey, while “Wetback of eternity” by Sergio A. Ortiz imagines the post-Trump immigrant nightmare: “My American dream became the hell of my exile.” Poets Opposing Evil Trump is a bit of an ominous read in hindsight, and I wonder how many of these writers truly anticipated that Trump would get voted in less that six months after the anthology’s release. For those looking to make sense of this nightmarish new political reality, this anthology will provide a diverting – if all too brief – respite. (Alison Lang)