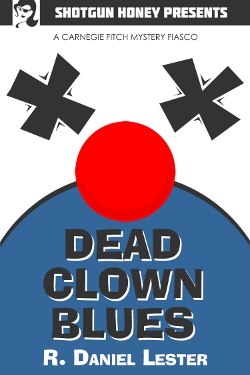 The first installment of R. Daniel Lester’s Carnegie Fitch Myster Fiasco series is a classic noir story. The 2018 Indie Writers’ Deathmatch semi-finalist’s newest book tells of Carnegie Fitch, a private eye in Vancouver, 1957. This is mystery right out of the Dashiell Hammett and Raymond Chandler playbook, except lazier.

Our protagonist, Fitch, does not have an actual private eye license, nor an office to bear his name. Not even a rundown bungalow is shabby enough, Fitch is behind on rent at a boarding house as we learn on page five.

The rest of the novel runs this gamut. There’s Adora Carmichael our villain and resident brunette, “built like a coke bottle,” some tough guys, in this case violent clowns known as the “dead clowns,” and other genre-specific accouterments.

Even so, this novel can take your breath away. For example, right as you think this book is lagging, Fitch happens upon the home of a criminal that he’s been tracking and he is struck in the head closing Chapter 10. Then, Lester smacks you in the face with Chapter 11.

In the time Fitch is unconscious, the reader is shown his dreams which are scored by the sound of Church bells ringing as “a mother and her son walk along Pender Street.” This chapter only spans pages 81-83, but in this space, Lester weaves a story about two parents not meant to stay together. How this makes that son, who’s really Fitch, take off “to find adventure, to ride the rails.”

This brief glimpse into the psychology of Fitch allows a substantially deeper connection between the reader and the character — allowing the story to seem truer, less uninventive. That is not to say Lester fails in any regard, it just felt (despite the presence of a clown posse) already done before. It would’ve been great to see more development of Fitch and his psyche.